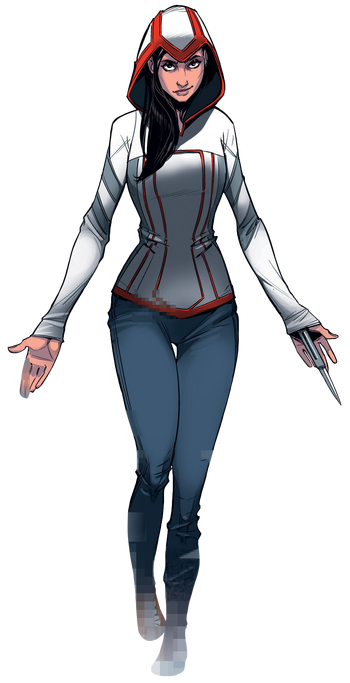 Charlotte de la Cruz (1992 – 2018) was an American Assassin recruited into the Brotherhood in 2015 and a former employee of Malta Banking Corporation. She participated in the hunt for Assassin renegade Joseph Laurier alongside Assassins Galina Voronina and Kody Adams. As the granddaughter of Erudito leader Florencia, she was also instrumental in securing an alliance between the hacking collective and the Brotherhood.

Tier: At least 9-A, higher with her Hidden Blades, melee weapons, bombs and firearms

Superhuman Physical Characteristics, Enhanced Senses, Extrasensory Perception, limited Precognition, Analytical Prediction, Information Analysis and Clairvoyance (via Eagle Vision, can even see through walls and vents and accurately foresee that they'd be safe after using said vent to escape), Accelerated Development and Power Mimicry (Via the Animus and Bleeding Effect), Master Fighter, Pressure Point Strikes, Stealth Mastery, Extreme Pain Tolerance (Even after breaking 3 ribs and being stabbed in the chest multiple times, she kept fighting against Jasdhip Dhami for several minutes more without showing any signs of tiring), Indomitable Will, Master Acrobat and parkourer, Weapon Mastery

Speed: At least Supersonic+ (Despited the fact that not even hours had passed since she used the Animus, she could easily dodge Uzi rounds with fear alone. On par with her ancestor Thomas Stoddard, who could casually react to flintlock shots and point-blank range and still manage to make a casual somersault. Fought on par with Joseph Laurier, who casually dodged multiple rounds from a AK-74-long-barrel-based rifle and viewed them as slow enough to simply duck out of their way. Charlotte later dodged the same rounds herself. Casually rolled away from rounds from a high-end M4 Carbine-based sniper rifle multiple times and can blitz others who do the same. Kept pace with Jasdip Dhami multiple times, and can also keep up with her team-mates and Otso Berg. Has outpaced massive explosions, outran rounds from the M134 Minigun, leapt from building to building, and is on par with Kiyoshi, who casually dodged stray gunfire from an HK416 and outpaced the same explosions as her. Managed to somewhat keep up with Juno, who previously blitzed her). Supersonic to Supersonic+ with most firearms

Durability: At least Small Building level+ (Before taking the abilities of her ancestors, she withstood a kick from an Abstergo operative that badly dented her metal door, also managed to jump the same distance as Galina and was only knocked out. Later relived the memories of her ancestor Hiram Stoddard, who was completely fine after diving from the top of Giotto's Campanille in Florence and kicking a man in the process. Fell 30 storeys from a skyscraper into a van while having sustained 3 broken ribs after being repeatedly stabbed in the chest prior to jumping out of the building, and seconds later easily fought against Jasdip Dhami and tanked a car crash alongside him as if she was never injured in the first place. Survived being punched away by Juno. Should be on par with most other Isu-Hybrids, who can take hits from the likes of Darius, tank attacks of these various magnitudes, take hits from Olympos Projects like the Minotaur, withstand explosions this powerful, and no-sell Isu beams that are powerful enough to vaporize three human beings and reduce them to a bloody mist at the slightest touch)

Stamina: Incredibly high (Withstood several hours in the Animus and a string of desynchronizations without much ill-effects)

Intelligence: Above Average. Charlotte possessed Eagle Vision, allowing her to sense the veracity of other people's statements as well as being able to see through walls. Thanks to the Bleeding Effect, Charlotte had gained her ancestors skills, such as combat, freerunning and was able to use hidden blade.

Retrieved from "https://vsbattles.fandom.com/wiki/Charlotte_de_la_Cruz?oldid=6523250"
Community content is available under CC-BY-SA unless otherwise noted.