The second Sweet Commander to appear, Charlotte Smoothie is a longleg-human hybrid, the 14th daughter of Big Mom and the oldest in a set of triplets, her younger sisters being Citron and Cinnamon. She's Totto Land's Minister of Juice, and has eaten the Shibo Shibo no Mi, which allows her to squeeze juice out of any object, as well as absorb the liquid into her body or weapons to increase their size and power.

She first appears in the Whole Cake Chateau alongside Baron Tamago guarding the 3 ponyglyphs, as intruders are suspected to wish to steal them.

With a bounty of 932,000,000 berries, Smoothie has the highest known bounty of any female character in the series.

Powers and Abilities: Superhuman Physical Characteristics, Expert Sword User, Limited Elemental Manipulation and Water Manipulation (Via controlling water extracted from her targets or her sword), Size Manipulation (Capable of enlarging her size by absorbing the water content of her targets, appearing like a giant), Large Size (Type 0 when using her power), Limited Matter Manipulation and Biological Manipulation (Wring Wring Fruit allows her to wring out the water content of living and inanimate matter. She can remove foreign objects, such as poison, from her body by using her power to wring herself. She can even "dehydrate" magma)

Attack Potency: At least Large Mountain level+ (Should be at least comparable, if not superior, to Cracker). The nature of her Devil Fruit ignores durability

Speed: Likely Relativistic+ (Should be as fast as Cracker)

Intelligence: High. She holds the position of a commander among the Big Mom Pirates, suggesting that she has a considerable amount of leadership and tactical skill, and can quickly come up with plans for her forces to trap and kill enemies 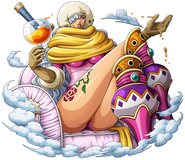 Retrieved from "https://vsbattles.fandom.com/wiki/Charlotte_Smoothie?oldid=5796527"
Community content is available under CC-BY-SA unless otherwise noted.