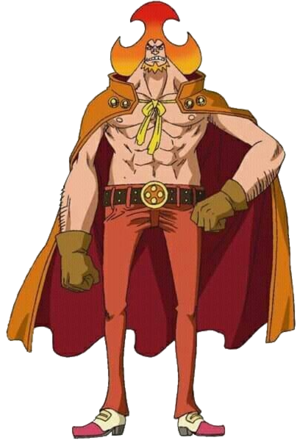 The fourth son of the Charlotte family and a member of the Big Mom Pirates, he resides over Totto Land as its Minister of Browned Food. He is loyal to his family and was noted as one of several monsters by Vito who compared him to his siblings Katakuri and Smoothie.

Attack Potency: Mountain level (Should be at least comparable to Tamago and Charlotte Daifuku. Fought Pedro), can ignore durability to an extent targetting the insides of a body.

Speed: At least Massively Hypersonic+ (Able to keep up with Pedro in a fight)

Durability: Mountain level (Fought Pedro, and should be at least comparable to Tamago. Got up after being kicked by Sanji)

Netsu Netsu no Mi: A Paramecia-type Devil Fruit that makes him a high heat human. He can heat up certain parts of his body, and by making contact with that heated part, he can transfer the heat to that object such as Pedro's sword.