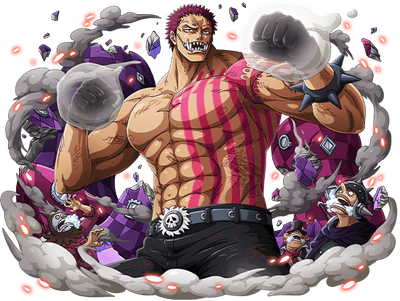 The third of the Sweet Commanders to appear, Charlotte Katakuri is the second son of the Charlotte Family and the oldest of a set of fraternal triplets, his younger brothers being Daifuku and Oven. He is Totto Land's Minister of Flour, as well as the strongest of the Sweet Commanders, with a bounty exceeding one billion berries; he eliminates anyone who would dare cross his mother. He has eaten the Mochi Mochi no Mi, which allows him to turn any part of his body into extremely sticky mochi and manipulate it as he wishes. His greatest asset, however, is his incredibly refined Observation Haki, which even allows him to see slightly ahead into the future.

Powers and Abilities: Superhuman Physical Characteristics, Large Size (Type 0 - 5.09m), Master Hand-to-Hand Combatant (He can easily out-perform opponents of this level of skill and has noted that it had been years since he took a hit directly), Technique Mimicry (Mimicked Luffy's fighting style and dominated him in a fist-fight), Expert Marksman and Spear Wielder, Proficient Haki user (Advanced Kenbunshoku Haki, Proficient Busoshoku Haki and Haoshoku Haki user), Candy Manipulation (Can transform into, create and manipulate mochi, an adhesive substance, as he pleases), Elemental Intangibility (Only in Paramecia form), Inorganic Physiology (Type 1. While he's turned into Mochi), Body Control and Shapeshifting (Capable of hardening his body with his paramecia powers. Can shift his Paramecia form to avoid incoming attacks. Increasing the range his limbs can reach, and alter their shape. He can also use his ability to wrap his body around his opponent's limbs, trapping them, and allowing him to attack with minimal retaliation), Duplication (He can also increase the number of limbs on his body, displaying up to two dozen arms and legs at once), Afterimage Creation, Size Manipulation and Statistics Amplification (Via increasing the muscle mass of his arms to briefly enhance his physical power as well as increase the size and mass of his mochi), Regeneration (High-Mid level, only in Paramecia-form. He recovered from being blown in half by an attack, and having most of his upper body blown away), Transmutation (Via Awakening. Allows him to turn inanimate objects into Mochi. This is limited to non-living things such as stone, buildings, etc.), Danmaku, Minor Fire Manipulation and Explosion Manipulation (via Grilled Mochi), Resistance to sound-based attacks (Can create earplugs made of mochi to cover his ears) and Fire Manipulation (Unaffected by Luffy's Red Hawk)

Attack Potency: At least Large Mountain level+ (He's stated to be the "Strongest of the Three Sweet Commanders", making him superior to Charlotte Cracker and Charlotte Smoothie. He virtually stomped Gear 3rd Luffy in a contest of strength while taking their fight as a joke. With a single blow, he staggered Gear 4th: Bound Man Luffy, although he is physically weaker than Bound-Man. He can match and exceed Gear 4th: Snake-Man Luffy in terms of power, stalemating him and later gaining the upper-hand over him. He's second only to Big Mom herself. Knocked Snakeman Luffy out with a single strike to the head with Zangiri, though both were severely fatigued and injured at the time)

Speed: Relativistic+ (Comparable to Bound-Man Luffy, though he only matched him after utilizing his Kenbunshoku Haki. Was able to compete with Snakeman and react to his attacks)

Stamina: Extremely High (was unphased after receiving injuries via blunt trauma from Gear 4th Luffy, and could continue a marathon fight with him for hours while using both Kenbunshoku and Busoshoku Haki nonstop without the need to rest, remaining invigorated. During the fight, he also endured a fatal injury, impaling himself completely through the side of his torso, damaging his intestines and stomach to some extent, and causing severe bleeding while only showing small signs of pain and fatigue before fighting again)

Intelligence: High level of fighting ability. Displays creative and effective ways to immediately turn a situation into his favor, such as using his power to make earplugs for him and his entire family while Big Mom's screams were causing everyone to be stunned. Or when he used his power to plug up Bege's canons. He focuses on efficiency, aiming to destroy any possible threats before they can do anything. He was initially sensitive about his abnormal jaw and teeth and would become enraged should anyone mock him or call him a monster, but during his fight with Luffy, he began to embrace his monstrous appearance. He is very honorable when it comes to fighting opponents that make an impression on him, not tolerating an interference from his family that results him gaining an upper-hand against Luffy--leading him to impale himself in the side with his spear in order to equalize Luffy's handicap and went out of his way to KO his nearby allies for the interruption

Weaknesses: Standard Devil Fruit users weaknesses. His powers are weak against anything that can make him wet, though this is simply because it lowers the density of his body, turning him into a more liquid substance-making it hard to trap his opponents. It does not harm him in any way.

-Mochi Mochi no Mi (Sticky-Sticky Fruit): Paramecia Devil Fruit. Katakuri is able to turn his body into a sticky, viscous substance similar to mochi. He can avoid attacks by turning his body into Mochi, allowing normal attacks to pass through him or to manipulate the shape of his body to dodge attacks without needing to do any actual movement. He can use the Mochi to harden around the opponent's arms and legs, trapping them after an arm or leg passes through his body. He can produce Mochi, allowing him to increase the size and reach of his limbs, and even increase the number of limbs his body possesses.

Devil Fruit Awakening: Katakuri awakens his devil-fruit powers, allowing his paramecia abilities to extend to the environment. Rather then having the ability to produce Mochi solely from his body, he is also capable of altering the environment around him into Mochi and control it at will.

Donquixote Doflamingo (One Piece) Doflamingo's Profile (Both start with Awakening)

Dorian Frog (Tower of God) Dorian's profile (Both at Low 6-B forms. Speed was unequalized)