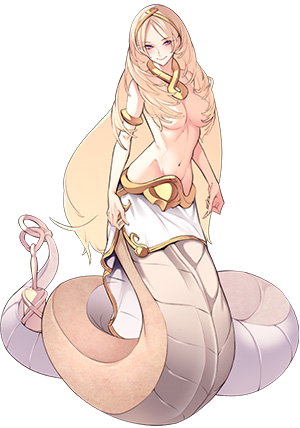 Charlotte Fregula is one of the Archenemy leaders of the mysterious organization known as Absolute Noah that seeks to survive the mysterious incoming catastrophe known only as the Calamity. However, Charlotte actually has a different goal that puts her at odds with Lilith and other members of the organization.

Durability: Wall level (Withstood a pressure that would have killed a regular human, should be comparable to Yurina Amatsu)

Intelligence: High, Charlotte is one of Absolute Noah's leaders and has remodeled her own brain into a supercomputer capable of simulating the entire planet, with computing power significantly superior to the one Satori's AIs like Maxwell have. Can use her modified brain to calculate hundreds of ricochets to accurately target enemies around corners/cover, even as they try to dodge.

Weaknesses: Those controlled by her infection have their intelligence lowered and cannot use supernatural powers

Echidna: Echidna is a legendary Archenemy from Greek Mythology and mother of monsters, similar to other Archenemies like Lilith or Angrboda, taking the form of a snake woman that would lure in men using her beautiful upper half only to strike them down and devour them once they approached. She gave birth to many different and powerful monsters, some even stronger than herself. In order to give birth to monsters bigger than her own body she has the ability to form an external womb, covering nearby surfaces with scales that are the color of dried grass yet glitter with a rainbow light as they throbb like an actual organ.

Retrieved from "https://vsbattles.fandom.com/wiki/Charlotte_Fregula?oldid=4108884"
Community content is available under CC-BY-SA unless otherwise noted.