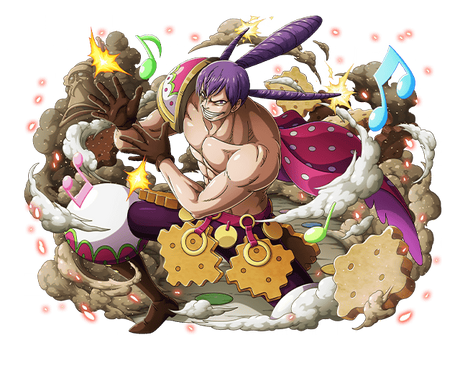 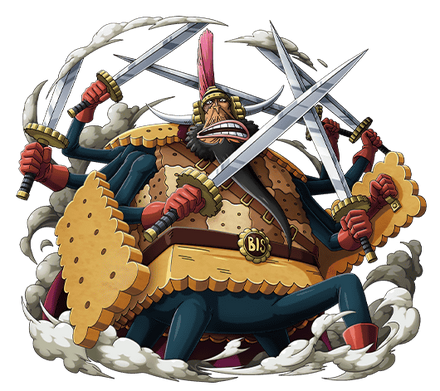 Charlotte Cracker, also known as Thousand Arms Cracker, is the 10th son of Big Mom and Totto Land's Minister of Biscuits. He has eaten the Bisu Bisu no Mi, allowing him to produce large numbers of biscuit crackers and reshape them in any form he wishes. He usually inhabits and fights from the inside of an enormous biscuit puppet crafted with his powers, to the point his bounty poster depicts the puppet and not his real face.  He was first revealed within the Wholecake Island arc when encountering Monkey D. Luffy and Nami. He is the first of the Three Sweet Commanders to have been revealed.

Powers and Abilities: Superhuman Physical Characteristics, Expert Swordsman, Haki (Armament and Observation user), Organic Manipulation (Can create and manipulate biscuits and candies), Golem Creation (He can create multiple Biscuit Soldiers and control them), Fear Manipulation, Some form of Aura, His Golems have: Limited Duplication and Weapon Creation (Can replicate an arm and sword if it is impacted), Enhanced Endurance with Shields, Large Size (Type 0)

Stamina: High (While capable of continuously fighting for 11 hours against Luffy, he cannot tolerate taking damage, and struggles to cope with pain inflicted on him)

Range: At least a dozen meters due to his size and sword

Intelligence: Cracker is an expert craftsman, shaping his biscuits into identical, hulking, and lifelike entities complete with weapons. He usually inhabits one of his puppets as a suit of armor, which he uses to mislead his enemies about his real appearance. Cracker can manipulate his puppets' bodies at will, including granting them extra limbs and weapons, and can even imbue the puppet he inhabits with Busoshoku Haki, further increasing its defensive capabilities. He was also capable of analyzing and outpacing Luffy in the middle of combat.

Weaknesses: Standard Devil Fruit users weaknesses. His biscuits are weak against water (If drenched, their bodies are softened to a point in which Base Luffy can overpower and devour them with relative ease). He has stated that he is oversensitive to pain. Cracker is confident in his abilities, but his confidence and violent nature can lead to arrogance, as he had underestimated Luffy, leading him to take an unnecessary blow due to carelessness, losing one of his Biscuit soldiers.

Bisu Bisu no Mi (Biscuit-Biscuit Fruit): A Paramecia-type Devil Fruit. Cracker is able to create as many biscuits as he wants to and craft them in a way he pleases.

Pretzel: Cracker is an exceptional swordsman wielding the named-blade Pretzel. 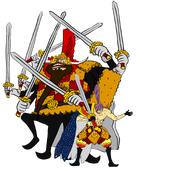 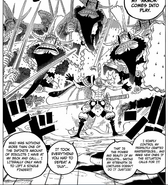