VS Battles Wiki
Register
Don't have an account?
Sign In
in: Marvel Comics, Characters, Male Characters,
and 26 more 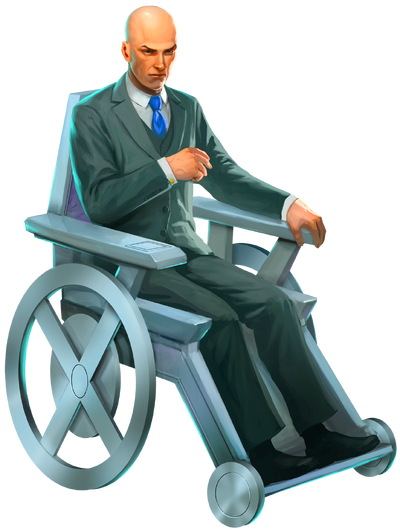 Charles Xavier (also known as Professor X) is a fictional superhero who appears in American comic books published by Marvel Comics as well as in a number of television and movie adaptations. The character was created in 1963 by writer Stan Lee and artist Jack Kirby, and has been a frequent if not regular character in most X-Men-related fiction since the beginning.

Xavier is a member of a fictional sub-species of humanity known as mutants, who are born with superhuman abilities. He is a powerful telepath who can read and control minds. He is the founder of the X-Men and runs a private school that shelters and trains mutants. He fights for peace and equality between humans and mutants in a world where anti-mutant bigotry is widespread.

Powers and Abilities: Telepathy and its many applications, including Mind Control, Mind Manipulation, Memory Manipulation, Pain Manipulation, Manipulation of one's perception of time (He has made people experience months of time in their heads when only hours passed in the real world), Illusion Creation, Ability to alter or take away senses or block the parts of the brain used to control superhuman powers, Ability to sense things from another person's perspective, The ability to communicate with animals, Psychometry, The ability to identify mutants via their distinct brainwaves, Can learn or teach languages and other complex information telepathically, Astral Projection

Attack Potency: Athlete level (Is a physically impaired paraplegic, but is otherwise in peak form for a man of his age)

Speed: Below Average in his normal wheelchair, Superhuman in his hovercraft wheelchair, Unknown reactions

Stamina: Average (Engages in regular exercise despite his position as head of the X-Men and his advancing age)

Standard Equipment: Wheelchair (sometimes uses a hovercraft version). The Mind Gem (But will refuse to use it unless he absolutely must)

Intelligence: Extraordinary Genius. Charles Xavier is one of the most intelligent people on Earth, being arguably its most powerful telepath and specializes in genetics and biology. Has at least 3 PhDs and invented the Cerebro and Cerebra telepathy-boosting machines. Due to his telepathic excursions, he has acquired a great deal of information from around the world, including knowledge of various cultures, fields of science, and important events. Xavier is also experienced in martial arts and the use of pressure points, allowing him to incapacitate those who are much younger and more agile than him and has spent decades preparing the X-Men for nearly every conceivable threat. In addition, he is savvy enough to develop the Xavier Protocols, a series of countermeasures to incapacitate the X-Men should they or he become a danger to mankind.

Weaknesses: Paraplegic (Not currently. It should be noted that although he has been cured several times, it is usually undone). His abilities can be countered by those who also possess sufficiently powerful psionic abilities or resistance to such abilities

Other: This profile only covers the Earth-616 Marvel version of Professor X