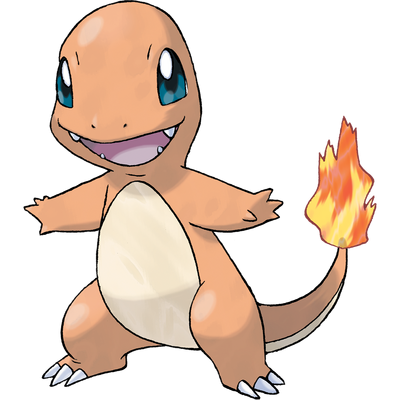 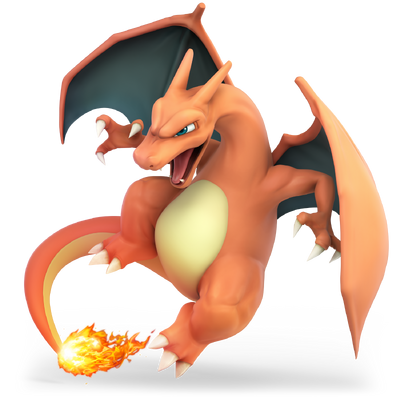 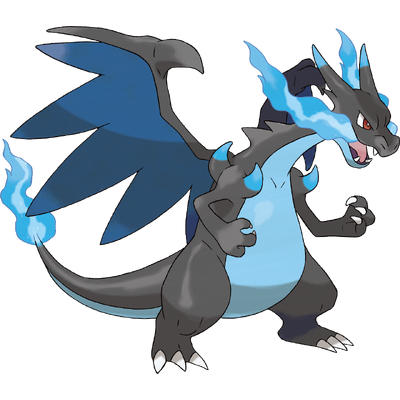 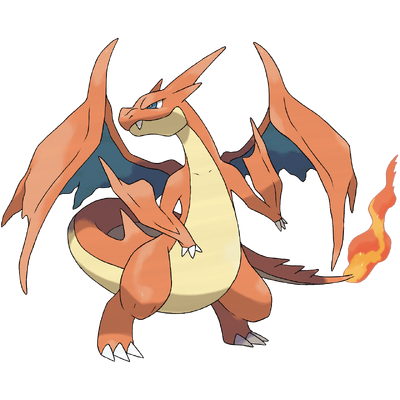 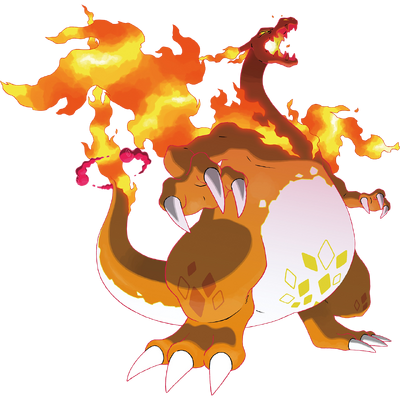 Charizard is a draconic, bipedal Pokémon and the final stage of the Charmander evolutionary line. It is primarily orange with a cream underside from the chest to the tip of its tail, which burns with a sizable flame.

Charizard has a long neck, small blue eyes raised nostrils, and two blunt horns protruding from the back of its rectangular head. There are two fangs visible in the upper jaw when its mouth is closed. Two large wings with teal undersides sprout from its back, and a horn-like appendage juts out from the third joint of each wing. Charizard's arms are short and skinny compared to its robust belly, and each limb has three white claws. It has stocky legs and cream-colored soles under its feet. It is also one of few pokemon capable of Gigantamaxing.

Lifting Strength: Class 25 (Can learn the HM Strength, and should be able to move boulders calculated of this strength) | Class 50 | Class 100 (Can overcome a moving tank) | Unknown | Class G (Compares to Gigantamax Sandaconda)

Stamina: High (It can last for minutes and hours against many strong Pokémon)

Intelligence: Charizard are known to be born fighters, regularly challenging other Pokémon to intense battles in search of the thrill of the fight. To this end, it is proficient in both close and long-range combat, slashing and kicking opponents who come in close and roasting those who choose to keep their distance to avoid its claws. Particularly powerful Charizard are known to challenge "pseudo-legendaries" such as to single-combat and won't stray from battles with entities as powerful as Articuno. However, their battle-readiness has made the species proud as a whole, refusing to fight those weaker than them and bearing a certain amount of overconfidence which may lead to reckless endeavors in their various scuffles

Weaknesses: It is weak to Water and Electric moves, even more so with Rock-type attacks, it needs to fly to be fast and cannot fly in small spaces, it tends to be stubborn, powerful enough that it tends to believe that nothing can defeat it. Charizard will die if the fire on the tip of its tail is completely extinguished, Blast Burn forces Charizard to rest and recuperate after its completion, leaving it vulnerable to attacks, Flare Blitz deals a significant amount of damage to Charizard on impact with its target, Charizard are known to be proud fighters to the point of overconfidence at times | As Mega Charizard X, it is only weak to Ground, Rock, and Dragon-type moves. As Mega Charizard Y, Drought won't activate during the heavy rain of Primordial Sea or when a the mysterious air current of Delta Stream appears. Technically Drought won't activate under the harsh sunlight of Desolate Land. However, Desolate Land is already an, effectively, even better version of Drought | Gigantamax can only be used in areas with Dynamax energy (i.e. dens and stadiums), Destroying the forcefield damages the pokemon

For moves that it can learn by other means, see here 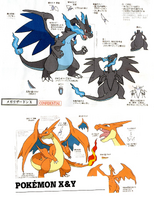