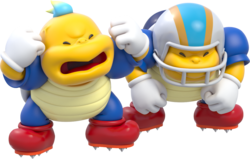 Chargin' Chucks are from the Mario Franchise. Unlike most Koopas, these Koopas have infant-like faces, but are antagonists of Mario nevertheless. These Koopas are stronger and not edible by Yoshi. They take three jumps from Mario, five fireballs from Fire Mario, or a swing from Cape Mario to defeat.

Powers and Abilities: Superhuman Physical Characteristics, not edible by Yoshi, Summoning (Can summon more Chucks into battle in Paper Jam)

Attack Potency: Wall level (They can break blocks and charge through boulders. They are also stronger than average Koopas)