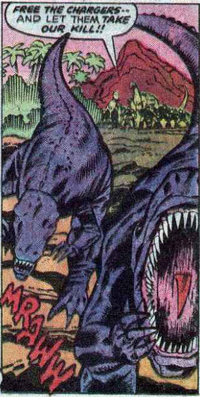 The Chargers are allosaurus-looking purple dinosaurs with spikes starting on the top of their head, going down their spines all the way to the tip of their tails. They were domesticated by the Lizard-Warriors and used for war. At least seven were seen in the comic, including one that was used to pull a war chariot, a yellow one, and a green one.

Retrieved from "https://vsbattles.fandom.com/wiki/Charger_(Marvel_Comics)?oldid=6597256"
Community content is available under CC-BY-SA unless otherwise noted.