VS Battles Wiki
Register
Don't have an account?
Sign In
Advertisement
in: Tier 2, Tier Low 2-C, Game Characters,
and 19 more 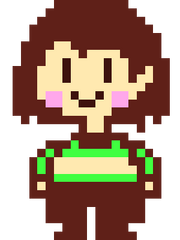 Chara is the true name of the first human to fall into the Underground. They are Asgore's and Toriel's adoptive child as well as Asriel's foster sibling. Although mourned by the Underground's residents after their death, their adoration for the fallen child belies a much more sinister persona that few are privy to and is only revealed in segments on the Pacifist Route before being showcased in full on the Genocide Route.

Name: Chara (Name in-game varies depending on what the player chooses to name them, but "Chara" is the true name)

Age: Pre-teen at the time of death

Classification: Human child, The Fallen Child, Adopted child of Asgore and Toriel, Asriel's adopted sibling, Manifestation of the player's willingness to kill just to increase their stats, The demon that comes when people call its name

Powers and Abilities: Superhuman Physical Characteristics, Possession, Incorporeality, Immortality (Types 4, 6, 7, and 8. Reliant on the player's desire to increase their statistics), Extrasensory Perception (Knew that the SOUL the player gave them resonated with a strange feeling), Soul Manipulation, Time Manipulation, Reality Warping, Acausality (Type 1, unaffected by time being rewinded by Frisk), Resurrection (Should be able to rewind time upon death like Frisk), Breaking the Fourth Wall (Can knowingly communicate with the player), Immunity to Soul Manipulation (Flowey described them as empty inside just like him, him lacking a soul. Chara said that his human soul wasn't theirs, but "yours". Previously died when having their soul combined with Asriel's, the latter collapsing into dust and his soul disappearing), possibly Resistance to Empathic Manipulation (Cannot understand the sentimentality of the player and those feelings any more, which the demon may be literally unable to understand. Flowey's lack of a soul made him believe he was unable to love other people and thus lacked compassion)

Attack Potency: Universe level+ (Destroyed Undertale as a game and its reality; Flowey with Chara's adopted view on the world wanted to destroy the timeline, the former believed they were working together to do the same until Chara betrayed him. Recreated the game after the player gives up their soul)

Striking Strength: Universal+ (Destroyed the game in one blow)

Durability: Universe level+ (Unaffected by their destruction of the game), the ability to SAVE & LOAD and Immortality makes them extremely difficult to kill

Intelligence: At least Average. Knowledgeable about the workings of SOULs and formulated a plan revolving around them, but is possibly a bit naive, as they presumably thought that putting flowers in a pie would have no negative consequences.

Weaknesses: Chara needs someone with strong enough Determination and capacity for violence to manifest and needed to possess a host to interact with the universe before they had reached a sufficiently great level of power.

Note: See this blog about misconceptions in Undertale for doubts over stats and claims we had on former years.

"SINCE WHEN WERE YOU THE ONE IN CONTROL?"

Calypso (Twisted Metal) Calypso's Profile (Speed was Equalized, 5-A Calypso was used, both had prior knowledge)