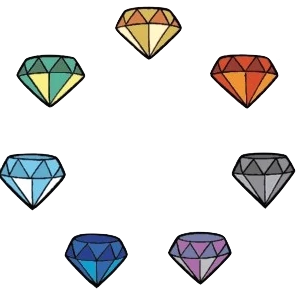 The Chaos Emeralds are magical gemstones containing great power. They are the physical manifestations of the Chaos Force. Although they've been depicted in a variety of colors and quantities, there are typically seven distinct emeralds: peridot (green), aquamarine (cyan), sapphire (blue), ruby (red), amethyst (purple), topaz (yellow), and diamond (grey). Chaos Emeralds have often been the center of conflict across space and time in several different realities.

Powers and Abilities: Chaos Energy Manipulation, Magic, Power Bestowal, Transformation, Statistics Amplification, Intangibility, Flight, Can provide as an energy source to various machinery, Energy Absorption, Reality Warping, Conceptual Manipulation (Type 2), Law Manipulation, Soul Manipulation, Gravity Manipulation (Can negate the forces of gravity to suspend objects in the air), Space-Time Manipulation, Causality Manipulation (Enabled Dr. Eggman to rewrite history with the Cosmic Reset Button), Sealing (can be used to trap beings inside them), Existence Erasure (Can make it as if someone or something never existed at all), Memory Manipulation, Likely most of the abilities from Power Rings, as they're the by-products of the Chaos Emeralds and have a limited amount of their power

Attack Potency: Multiverse level+ (The Chaos Emeralds are physical manifestations of the Chaos Force, which binds all planes of existence and exists outside the space-time of infinite universes. Can create a "Super Genesis Wave", which can rewrite all of existence within the Archie Sonic-verse. Empowered Super Sonic to perform his feats, such as defeating Solaris and the Egg-Wily Machine X. Granted the Ancient Walkers their power. An innumerable amount of Chaos Emeralds (enough to create an ocean, as well as scatter across the surface of a planet) were sealed into the Zone of Silence and fused into seven greater Chaos Emeralds, when the power equivalent to only fourteen was enough to threaten infinite realities. Should not be infinitely weaker than the Master Emerald)

Durability: At least Universe level+ (Remained intact after the obliteration of a Zone induced by Super Sonic and Hyper Knuckles), users are granted Multiverse level+ durability

Range: At least Multiversal+ (The Super Genesis Wave affected both Sonic’s multiverse and Mega Man’s multiverse, each of which contains infinite universes)