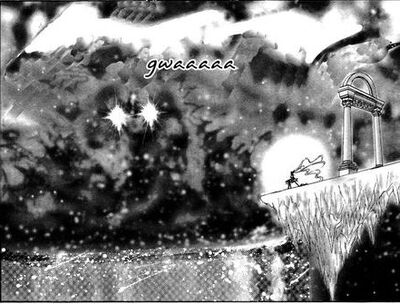 Chaos is the final villain Sailor Moon ever had to face, and all evils are said to be manifestations of her. It is the primordial void that existed before even Cosmos. As the Chaos-Spawn are all Aspects of itself, it can use the abilities of them all. This is the original depiction of the character created by Naoko Takeuchi.

Sailor Chaos is the Sailor Guardian form of Chaos. She appeared once in the last chapter of the manga, in a flashback, when Sailor Cosmos mentions her.

Name: Chaos, its aspects have their own names | Sailor Chaos

Attack Potency: Universe level+ (Was warping to the "far reaches" of space-time[1]) | Possibly Low Multiverse level (Constantly battled against Sailor Cosmos and has been described as a massive threat to her[2])

Lifting Strength: At least Stellar, likely Immeasurable (As big as the Galaxy Cauldron and is one with it)

Durability: Universe level+ (Survived the beginning of the Universe, believed that she would survive the beginning of a new universe, an "infinitesimal" part of her survived within the Galaxy Cauldron, which can destroy even Star Seeds), Intangibility, Regeneration[note 1], and Abstract Nature make her incredibly hard to kill | Possibly Low Multiverse level (Comparable to Sailor Cosmos)

Stamina: Infinite (Can create more energy for herself at will, space-time does not affect her normally) | Limitless (Battled endlessly with Sailor Cosmos and likely to continue on indefinitely)

Chaos has enough raw power to make most skyfathers blush.

And when you consider that Lambda Usagi, two power-ups below Sailor Cosmos, could revive beings from having even their star seeds destroyed...Sailor Chaos has a lot of power to say the least.

As Energy is the primary weapons the Soldiers of Love and Justice use against it, Chaos has numerous defenses against energy.

Chaos can take energy from others for itself.

Chaos can also use it's own form of energy, negative energy.

Chaos can easily manipulate the illusory world of matter that mortals call reality.

Chaos, as a proper eldritch abomination can warp the minds of beings.

Chaos can play around with the space-time continuum at will.

Chaos can likewise manipulate dimensions at will.

Chaos has a few other tricky ways of distorting reality.

Chaos has access to the Evil Eye, Beast Hands, and Curse Techniques

Chaos is an immortal being, and so long as the Galaxy Cauldron exists, it will never die permanently. And through some vague degree, it is responsible for the existence of the other antagonists that Sailor Moon had to fight.

Not much is known about the powers of Sailor Chaos. We only know that her attacks are apparently extremely efficient and her destruction ability is even more than that of Sailor Galaxia aswell. It is known though that she is the only rival to Sailor Cosmos.