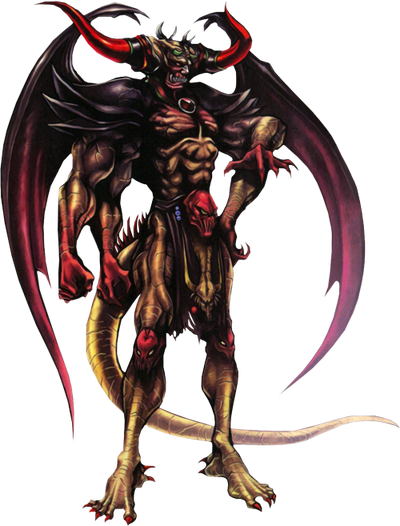 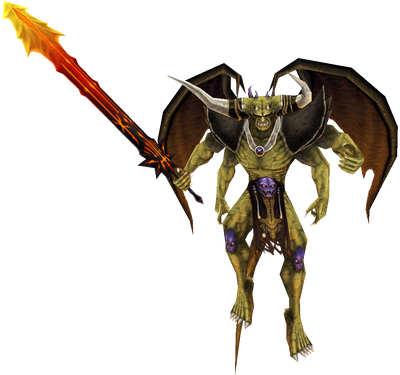 Chaos (カオス, Kaosu) is the primary antagonist and the final boss of Dissidia Final Fantasy and Dissidia 012 Final Fantasy. He is the god of discord that opposes Cosmos, the goddess of harmony, both being equal in power. During Dissidia Final Fantasy, Chaos and his forces tip the balance of power in their favor, setting the stage for their victory. Dissidia 012 Final Fantasy explores this shift in power in-depth, and the actions taken by hero and villain alike that set the stage for the thirteenth cycle. Chaos is voiced by Norio Wakamoto in the Japanese release, and Keith David in the English release.

Attack Potency: At least Large Planet level, possibly Galaxy level (Superior to all of the Warriors of Cosmos, who needed the Crystals in order to defeat him. Among them, the Warrior of Light in particular had showcased the ability to temporarily fend off Feral Chaos)

Speed: Sub-Relativistic (Fought all of the Warriors of Cosmos at once)

Durability: At least Large Planet level, possibly Galaxy level (Tanked numerous strikes from the Warriors of Cosmos, all of whom would have been unable to defeat him without the Crystals)

Stamina: Extremely high (Capable of fighting a long battle against the Warriors of Cosmos without tiring)

Range: Extended melee range with claws. Tens of meters with magic attacks. Hundreds of meters when grown to maximum size.

Intelligence: Chaos is an extremely skilled physical combatant and magic user, being able to fend off all of the Warriors of Cosmos at once (all of whom are skilled fighters in their own right) and would have done so with ease had it not been for their Crystals (evident in the twelfth cycle by his casual defeat of Cloud). In addition, he is a capable strategist, having won several cycles against Cosmos despite the fact that that his warriors had been plotting against him all the while. While Cosmos never confronted the enemy personally with the exception of the twelfth cycle, Chaos was more than willing to confront Cosmos personally and kill her to preemptively end the conflict, an act that none of the Warriors of Cosmos anticipated.

Weaknesses: Has a tendency to hold back unless he's taking significant damage, after regaining his memories of who Cosmos truly was, his sanity suffered for it

Retrieved from "https://vsbattles.fandom.com/wiki/Chaos_(Dissidia_Final_Fantasy)?oldid=4641852"
Community content is available under CC-BY-SA unless otherwise noted.