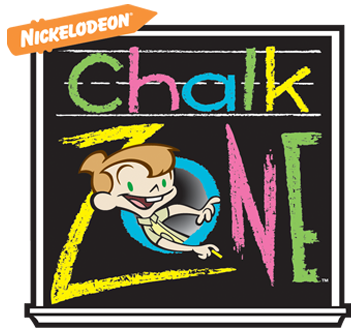 ChalkZone is an American animated television series created by Bill Burnett and Larry Huber for Nickelodeon. While serving detention for being distracted with drawing cartoons in class, 10 year-old Rudolph "Rudy" Tabootie happened to pick up the piece of Magic Chalk that would lead to a world beyond anything even his own extraordinarily creative mind could have imagined. In drawing a circle with this Magic Chalk, he opened a portal to ChalkZone, the place where everything that has ever been drawn in chalk and erased ends up. It's here that he meets-- and incidentally saves-- a superhero-themed, wise-cracking character named Snap who Rudy drew when he was eight. Snap informs Rudy that, as a wielder of the Magic Chalk, he is to be ChalkZone's protector from the various threatening creations which are erased nearly every day.

Not long after, Rudy meets Penny Sanchez-- a child genius who Rudy has crush on-- and introduces her to the world beyond the chalkboard. From then on, the trio of friends would face an immense variety of challenges produced by ChalkZone's fantastical nature, all while trying to keep its existence a secret from the rest of the world.

In regards to conventional strength, the verse does contain superhuman feats. Rudy himself managed to survive pulverizing a pig statue mostly unscathed, giving him Wall level durability. He has also reacted to lasers, putting him at Relativistic speeds. Meanwhile, Snap is known for being able to take quite a bit of abuse, having endured being hit by a meteor with ease. With this feat, he comes to the high end of City Block level.

Supernatural abilities is where this verse really shines. Do the Magic Chalk's magical properties, Rudy is able to use it for Creation, Reality Warping, and Portal Creation. However, from these abilities are spawned several others-- such as Life Manipulation, Spatial Manipulation, and BFR, respectively. Rudy has created entire planets and moved stars with the chalk's abilities, and he even implied once that he could redraw all of ChalkZone if it were destroyed. This puts the Magic Chalk's Attack Potency anywhere between Planet level to Star level to Universe level+. It is heavily implied that the only limits to what can be drawn with the Magic Chalk are set by Rudy's own imagination, which just so happens to be massive in and of itself. Penny is able to use the Magic Chalk as well, so she too would have access to the abilities and power it grants Rudy. Most residents of ChalkZone have abilities of their own as well. Though a running joke is based around Snap's apparent lack of powers, he does have remarkable survivability thanks to his Regeneration and Body Control.