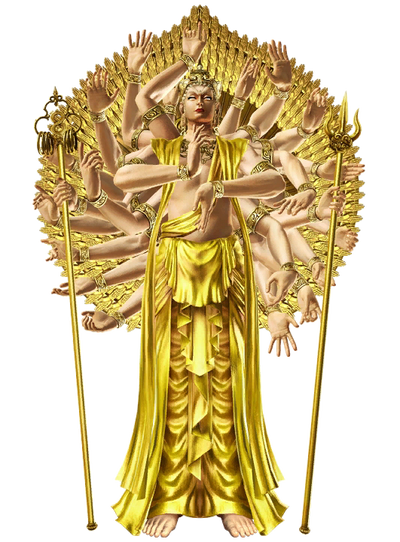 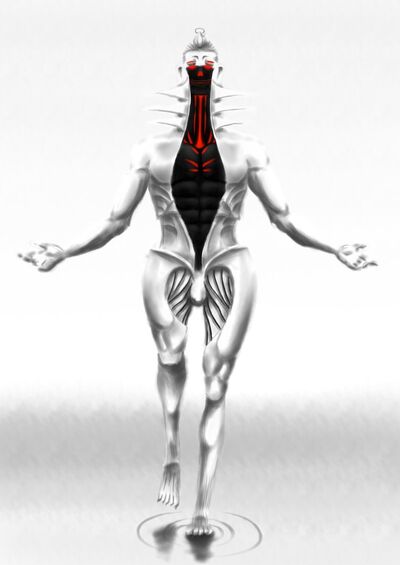 Chakravartin (転輪聖王, Tenrinjōō; Sanskrit: चक्रवर्ति), also known as the Golden Spider, is the mysterious ruler of Naraka, and the God of Mantra. He accompanied Asura after his fall, which was later revealed to be his plan for choosing an ideal ruler for Gaia. Chakravartin is the true antagonist of Asura's Wrath.

Classification: God of Mantra (alternatively known as the "Spinner of Mantra"), Embodiment of the Wheel of Life, Ruler of Naraka

Stamina: Very high (Capable of taking several brutal beatings from Asura, only tiring at the final stretch of their fight)

Range: Extended melee range (several meters) in melee by virtue of sheer size, likely much higher with telekinesis and reality warping (Created Gaea, and should have similar telekinetic capabilities as his Golden form) | Thousands of lightyears (Warped and pulled the entirety of the Milky Way Galaxy towards him) | Standard melee range physically, likely similar to base with telekinesis and reality warping

Standard Equipment: Staffs | None | None

Intelligence: Genius (Very wise, orchestrated the events of Asura’s Wrath, from planting the Gohma in Gaea to setting off the war between them and the Demigods, to find an heir. Tricked Asura as being a sort of friendly, albeit annoying, creature whenever Asura is in Naraka)

Start a Discussion Discussions about Chakravartin