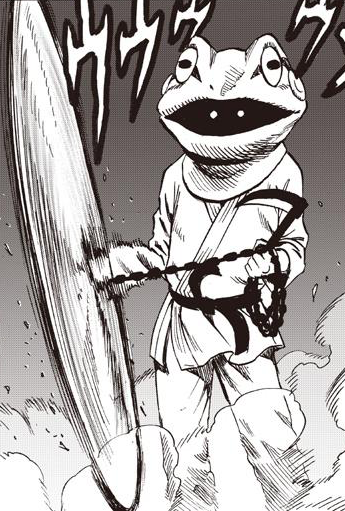 Chain'n'Toad is an A-Class Rank 36 hero for the Hero Association.

He obscures his face with a large frog helmet, wearing a martial artist's gi to complete his attire. Being a fairly skilled hero, he was selected by Death Gatling to assist in hunting down Garou.

Attack Potency: Large Building level+ (Should be comparable to other physical fighters in the A-Class)

Speed: At least Supersonic (Should be much faster than the likes of intraining Saitama)

Retrieved from "https://vsbattles.fandom.com/wiki/Chain%27n%27Toad?oldid=5638529"
Community content is available under CC-BY-SA unless otherwise noted.