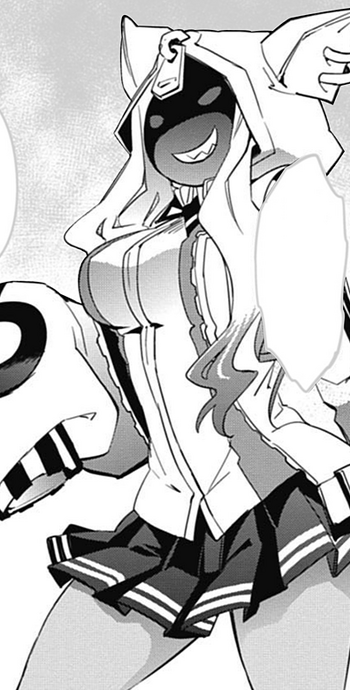 Chachakaka is a Kaka assassin hired by the Hazuki family in BlazBlue: Remix Heart. Unlike her partner Shiori Kirihito, Chachakaka does recon and intelligence work and rarely does actual assassinations. Just like her partner Shiori, Chachakaka comes off as a happy-go-lucky person, a façade that masks a much more dangerous side, owing to the fact she is an assassin. According to Shiori, she likes to be alone, and she sleeps by herself. Chachakaka is also very mischievous and often likes to pull harmless pranks with her partner, as evidenced in the Military Academy’s spa, when she and Shiori pushed Kajun Faycott and Mai Hazuki together when the two were bare naked.

Superhuman Physical Characteristics, Excellent Assassination Techniques, Stealth Mastery, Forcefield Creation (Capable of creating barriers with various sizes), Chain Manipulation, Enhanced Senses (Kaka Clan have very good senses), Surface Scaling and Weapon Mastery, Likely Ars Magus User and Regeneration Negation (Up to High-Godly; is able to utilize Ars Magus, a weapon capable of killing the Black Beast, a creature that has the ability of Self Observation, which is what Terumi used to regenerate from Hakumen's Time Killer)

Attack Potency: At least Building level (Managed to damage RH Mai, albeit he admits that she'll lose if the fight goes further)

Speed: Massively Hypersonic+ (Fast enough that Mai needed to amp herself in order to catch her)

Durability: At least Building level (Managed to take a hit from Mai)

Stamina: Unknown. Never shown to be acting that much.

Intelligence: Average. Has good assassination techniques and even managed to see through Toichiro's thoughts, but she's also shown to have around the same intelligence as Taokaka does.

Weaknesses: Lazy and doesn't fight if she knows she can't win.

Retrieved from "https://vsbattles.fandom.com/wiki/Chachakaka?oldid=5882663"
Community content is available under CC-BY-SA unless otherwise noted.