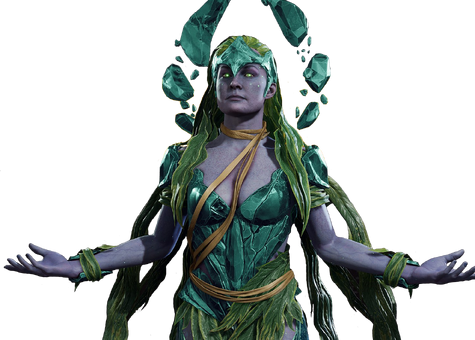 Cetrion is one of the currently known Elder Gods in the Mortal Kombat universe. She is the sister of the God of Death also known as Shinnok and daughter to Kronika, the Keeper of Time.

Elder Goddess of Virtue, Guardian of Life. When Shinnok threatened to conquer the Elder Gods, Cetrion cast him into the Netherrealm. Her blessings answer the prayers of warriors battling against darkness. But at times, the heroic virtues she upholds are at odds with her quest for universal balance.

Age: Millions of years old. By the end of the events during the storyline in MK11, the timeline is resetted to the dawn of time, and this process was repeated many times; Cetrion lived through every timeline

Attack Potency: Small Country level normally (Superior to an unrestricted Demigod such as Shao Kahn and Raiden), up to Large Planet level with Size Manipulation (Cetrion generates this much energy by growing to a large size in her Good and Evil Fatality) | Large Planet level (Stronger than before, fought Fire God Liu Kang)

Range: Standard melee range. Tens of meters with tendrils. Kilometers with elemental powers. Up to Planetary with size manipulation

Weaknesses: Her powers are compromised in a realm that isn't under her jurisdiction.

Cetrion and her mother, Kronika. 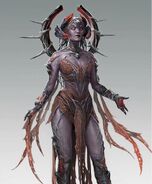 Cetrion with a darker aesthetic.
Add a photo to this gallery

Cetrion arrives in MK11.
Add a photo to this gallery