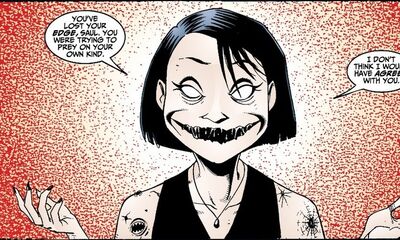 The female Jin En Mok that is partnered with Saul in the Vertigo series, Lucifer. The two work together in their effort to gain access to the open portal Lucifer created from the Letter of Passage Yahweh granted him.

Name: Cestis of the Dancing Flesh

Gender: Inapplicable. Appears as a female

Age: Inapplicable (The Jin En Moks are much older than Creation, Heaven and God)

Attack Potency: Unknown, likely Wall level (Destroyed a brick wall) | Outerverse level (Creation would be destroyed as a side effect of her regaining her true form)

Range: Extended melee range physically. Unknown with hax (Berim, a Jin En Mok, held off the Gates to the Void made by Elaine and Lucifer) | Irrelevant

Weaknesses: Needs to feed regularly. can be overcome by the feelings and memories of the person she ate, and will slowly become the person she killed. Her body can be destroyed if her heart or large intestine is eaten | None Notable