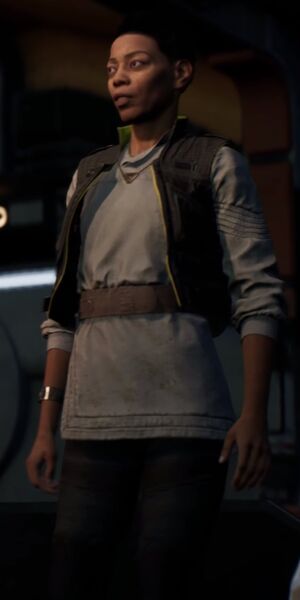 Cere Junda was a human female Jedi who was trained by Jedi Master Eno Cordova. After she became a Knight, she took on a Padawan of her own named Trilla Suduri. However, after the passage of the infamous Order 66 and commencing of the Jedi Purge, she and Trilla would both end up captured and mercilessly tortured by the Galactic Empire. Trilla would fall to the Dark Side and become the Second Sister Inquisitor, an event which would drive Cere to use the Dark Side and escape in desperation. She would later on sever her Force connection out of guilt. But she did take on the fugitive Jedi Cal Kestis under her wing and attempt to revive the Jedi Order using a holocron - left behind by her old master - containing a list of Force sensitive children across the galaxy.

Age: At least mid to late 40s (Would have been in her late teens to early 20s as of the Dark Temple series. Should, therefore, be at least in her mid to late 40s as of Fallen Order)

Attack Potency: Town level+ (Was a Padwan in her late teens to early 20s at this point. Should scale to the likes of Season 1 of Rebels Kanan Jarrus, who wasn’t as far along in his training as of Order 66). Can cut characters with durability on the level of the AT-AT walker with her lightsaber | Large Town level (When tapping into the Dark Side, she actually managed to pressure Darth Vader for several seconds, even impressing the Dark Lord. Via scaling from her own defensive power when tapping into the Light Side) | Wall level physically (Should not be weaker than ARC Troopers and Dathomirian Nightsisters who can overpower BX-series droid commandos). Small Building level with a blaster (Her DL-18 is a heavy blaster pistol)

Lifting Strength: Peak Human naturally. Can be augmented to Superhuman levels with the Force. Class M with telekinesis (Should not be any less powerful than Kanan Jarrus or Ezra Bridger, who lifted the Lothal Jedi temple together)

Durability: Wall level naturally. Town level+ with Force amplification (Scaling from Kanan Jarrus) | Wall level naturally. Large Town level with Force amplification (Put up a Force Barrier which blocked multiple lightsaber strikes from Darth Vader. It should be noted that lightsabers in the hands of even a Padawan level Jedi can cut through the armour plating of an AT-AT walker) | Wall level (Should not be any less durable than ARC Troopers)

Range: Extended melee range with lightsabers. Dozens of metres with telekinesis. Interplanetary to Interstellar with telepathy and Force senses (Should be at least comparable or superior to in-training Padawans who can sense Force presences across a planet and planetary systems, as well as Post New Hope Luke Skywalker [who could sense enemies from multiple light-years away]). 120 metres with DL-18 blaster pistol.

Intelligence: High. Cere was headstrong, reckless, naive as a Padawan. However, since her knighthood and the after the ordeals she has been through, she has matured into a fine teacher and wise leader. She is a capable tactician, a master of stealth, and a highly skilled and dangerous combatant overall. She is a masterful hacker and communications expert. She has also crafted various codes to mask the true identity of starships and get them through Imperial Navy blockades.

Weaknesses: Headstrong, reckless, naive as a Padawan. As of the Imperial Era, she struggles with PTSD following Order 66 and her torture at the Fortress Inquisitorius. She also struggles with her connection to the Dark Side of the Force, which can consume her when she is angered enough.

Cere as a Padawan with her original green lightsaber.

Cere in her Jedi Knight robes. 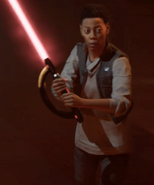 Retrieved from "https://vsbattles.fandom.com/wiki/Cere_Junda?oldid=5638461"
Community content is available under CC-BY-SA unless otherwise noted.