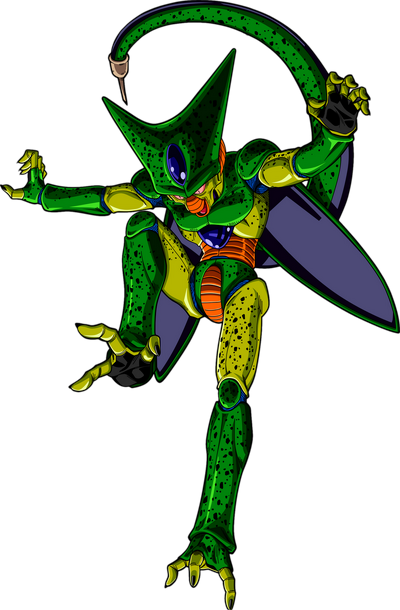 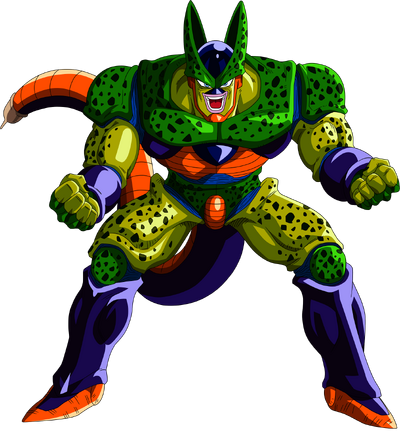 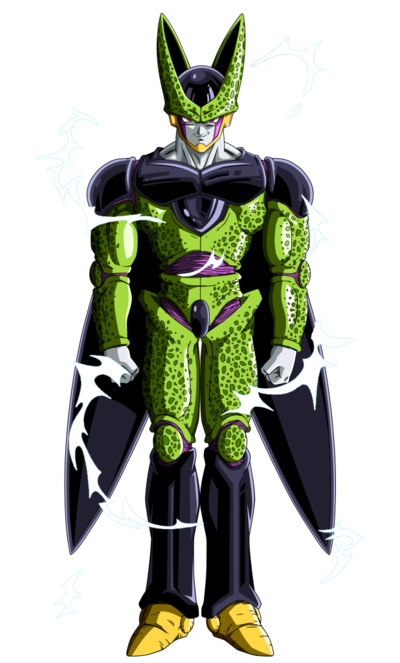 Cell is the ultimate creation of Dr. Gero, created from the DNA of the greatest fighters to ever visit Earth and tasked with the simple goal of killing Son Goku. However, to reach his perfect form and full power, Cell must absorb Gero's other biomechanical creations; the Androids, 17 and 18.

Originally hailing from the future of an alternate Trunks in which he killed the Androids, Cell killed his timeline's Trunks and used his Time Machine to travel to the past to absorb this timeline's Androids so that he can reach perfection and fight and kill as he pleases. He arrives in the main Dragon Ball timeline around four years prior to the emergence of the Androids, and devolves into his larval state to hide underground and await their appearance.

Powers and Abilities: Master Martial Artist, Superhuman Physical Characteristics, Accelerated Development (Training; Physical Stats, Abilities), Acrobatics, Ki Manipulation (Can be used defensively and offensively, to strengthen his skin or to fire ki blasts, which can home in on targets, and form defensive barriers), Ki Sensing (Can locate others by reading their ki), Enhanced Senses (Should have the senses of a Saiyan, allowing him to locate small, distant objects by their smell, see clearly over long distances, and track the movements of others even in pitch black conditions by feeling vibrations in the air), Self-Sustenance (Type 1, possibly Type 2), Flight, Spaceflight, Breath Attack, Ki / Energy Absorption (He can absorb others with his tail, either by stabbing them with it to absorb their ki / energy and all of their organic matter, or engulfing them with it to fully absorb them. He also stated that he could probably use the Spirit Bomb), Reactive Power Level (Due to his Saiyan blood, Cell grows stronger every time he fights and can become stronger in the midst of combat, vastly increasing in strength whenever he is mortally injured), Power Mimicry (Can copy Ki-based techniques), Shockwaves Generation, Afterimage Creation, Light Manipulation (Can create flashes of light to blind opponents), Body Control (Can revert into prior forms and should have a level of control over his body similar to Frieza), Elasticity (Due to his Namekian DNA, he should be capable of stretching his arms out to great lengths), Size Manipulation (Can grow larger when bulking up and should be capable of growing in size like a Namekian), Vocal Mimicry, Alteration and Amplification as Semi-Perfect Cell and in later forms (Can use Android 17's voice, later amplified his own voice), Likely Explosion Manipulation, Life Creation via Biological Manipulation (Can spawn Cell Juniors from his tail), Likely Telepathy, Telekinesis, Teleportation, Dimensional Travel, BFR, Self-Destruction, Transformation (Can transform into his Semi-Perfect and Perfect forms by absorbing the androids, and can transform back into higher forms even if he loses them), Longevity, Immortality (Type 2, Type 3, possibly Type 1), Regeneration (Low-High; Cell can regenerate from a special, core cell nucleus contained in his head; given that he has regenerated from having his top half blown off and from self-destructing, it is likely that this cell is able to survive extensive damage), Resistance to Extreme Cold and Cosmic Radiations

Attack Potency: Star level (Superior to Frieza in his base state, growing much stronger after absorbing hundreds of thousands of humans, allowing him to casually overwhelm Piccolo and Android 17 before matching Android 16) | Star level+ (Grew considerably more powerful than his Imperfect form and casually stomped Android 16) | Large Star level+ (At full power, Cell is far stronger than any of the Z-Fighters, including SSJ Goku and SSJ Gohan, and is capable of casually toying with both. He is outclassed only by SSJ2 Gohan) | Solar System level (After his Zenkai, he grew in power to reach SSJ2 Gohan's level and broke his arm with a single ki blast. He said that he was going to destroy the solar system from Earth, a statement that has been confirmed by many guidebooks).

Stamina: Extremely high. Cell is an incredibly powerful fighter who can battle against opponents for long periods of time, easily keeping up with Goku throughout their fight and eventually outlasting him. However, though he has absorbed both Androids 17 and 18, he lacks their limitless stamina and can still be worn down over time

Intelligence: Despite his young age and technical lack of experience, Cell has inherited the knowledge and skill of those he was created from. His combat skill and knowledge of ki allows him to immediately and easily see through the weaknesses of Trunks' new transformation, and in combat, he easily matched Goku. He was able to outmaneuver and escape Piccolo and the other's attempts to hunt him down while constantly feeding on new humans in the process, and due to his knowledge on the techniques and personalities of the Z-Fighters, he is capable of easily manipulating them and playing to their differing desires. However, Cell is immensely overconfident and desires a good fight above all else

Weaknesses: Cell is extremely overconfident, and due to his Saiyan blood, he relishes a good challenge and will avoid fighting at full power and let opponents reach their most powerful states to get one. When outmatched, Cell will begin to panic and fly into a rage, fighting irrationally. He cannot absorb mechanical beings by puncturing them with his tail, and powerful enough strikes to his stomach can cause him to regurgitate whoever he absorbed by engulfing them with his tail, causing him to devolve if he regurgitates one of the androids. He needs to locate a ki signature to teleport using Instant Transmission

Ki: The fighting power and life force of a martial artist, a tangible energy derived from the user's vigor, courage, and mind. It can be used in a number of ways, such as to surpass the limits of one's body to greatly increase in strength, and it can be fired as blasts of energy or used to create defensive barriers. Ki is a large part of Cell's superhuman abilities, alongside his unusual composition and the varied DNA he possesses. Due to his nature as a hybrid created from the DNA of many fighters, Cell possesses many of their techniques.

Bio-Android Physiology: Cell is Doctor Gero's greatest creation, a "perfect warrior" created from the cells of the greatest warriors to ever visit Earth, containing the DNA of Son Goku, Vegeta, Piccolo, Frieza, and King Cold. Due to this combination of genes, Cell possesses numerous favorable traits and special abilities. Like Frieza's race, he can survive the gravest of injuries and live in the vacuum of space, remaining alive even after destroying most of his body with his self-destruction, and he has the regenerative capabilities of a Namekian. However, his have been greatly enhanced, allowing him to regenerate as long as the special core nucleus contained within his head still remains. Even having the top half of his body vaporized or blowing himself to pieces is little more than a delay, and due to his Saiyan DNA, this will actually make him stronger. Cell grows more powerful over the course of combat, allowing him to constantly push his own limits during a fight and rise to higher and higher peaks in power. This ability grants a substantial boost in power when Cell is badly injured, allowing him to reach a whole new level of power once he regenerates.

On top of these powers, Cell likely has the other traits of the species whose DNA he has incorporated, such as the Namekian ability to extend their limbs and grow to greater sizes. While he must absorb Androids 17 and 18 to reach his full power and achieve his Perfect form, once he has reached this form, his cells remember it. Even if he is forcibly devolved into a lower level or regurgitates one of the Androids and loses the state, he will regenerate back into his Perfect form once injured.

Note: Here is a link to a blog justifying Cell's tier.

The Batter (OFF) The Batter's Profile (Speed was Equalized. Both were 4-B)