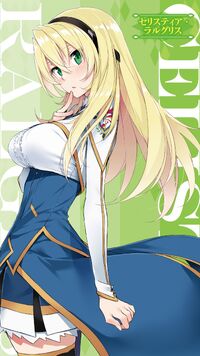 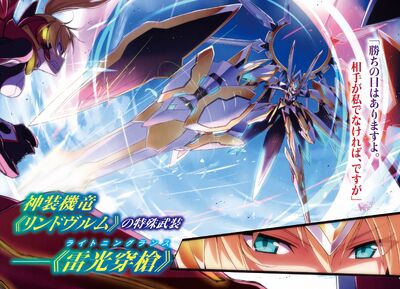 Celistia Ralgris is one of the protagonists of Saijaku Muhai no Bahamut. She is known as the strongest student at Royal Knight Academy and the leader of Syvalles.

Attack Potency: Athlete level, Multi-City Block level+ with Sword Device (The Sword Devices of Divine Drag-Rides are able to harm Abyss that fight said Divine Drag-Rides) | Multi-City Block level+ (Considered the only Drag-Knight in the New Kingdom to be able to kill a Ragnarok and later helped Lux Arcadia to kill Poseidon, Defeated both Krulcifer Einfolk and Lisesharte Atismata even when held-back, Her Starlight Zero is this strong) | Multi-City Block level+ (Fought Sacred Eclipse's First Incomplete Incarnation, She is still considered Academy's Strongest, so she should be superior to Krulcifer and Philuffy Aingram) | Town level (Fought Lux)

Stamina: Celistia shows high compatibility with Drag-Rides, allowing her to use a Divine Drag-Ride like Lindwurm for longer periods of time than the elite soldiers of the New Kingdom. During the New Kingdom arc, Celistia received a Baptism, which can inflict agony beyond imagination, being described by people who survive them as having their blood boiling in addition to feel pain across their entire body, and stated by Singlen to tamper a lot the nerves in the whole body, and recover from it.

Range: Extended melee range with Sword Device, Hundreds of meters with other weaponry

Intelligence: Despite being only a Drag-Knight student, Celistia is already considered the second most skilled Drag-Knight of the New Kingdom just behind Lux, with all different kinds of veteran Drag-Knights with decades of experience looking up to her, and with the Four Great Nobles council saying none of them could hope to compare to Celistia's skill.

Weaknesses: Due to her lack of heavy armor, it is easier to deal heavy damage to Celistia after activating Break Purge

Notes: For an in-depth explanation of Baptism, see here here.