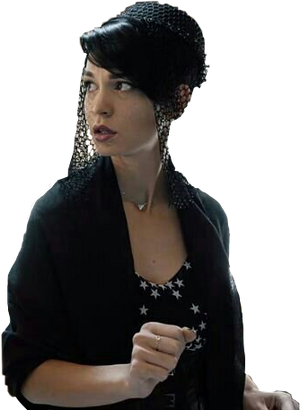 Celine is a self-proclaimed master of the arcane arts and former wife of Mark, who cheated on his ex-husband with the Colonel, setting the chain of events that lead to Mark's downfall.

Powers and Abilities: Magic, Weapon Mastery, Extrasensory Perception (Sensed a dark presence within the manor), Sealing and Memory Manipulation (Sealed Damien's consciousness and memories to the events that had happened) and Clairvoyance

Stamina: Above Average (Can work under extreme temperatures without significant wear and tear)

Intelligence: At least Above Average (States herself as highly knowledgeable in arcane arts)

Retrieved from "https://vsbattles.fandom.com/wiki/Celine_(Who_Killed_Markiplier%3F)?oldid=5819793"
Community content is available under CC-BY-SA unless otherwise noted.