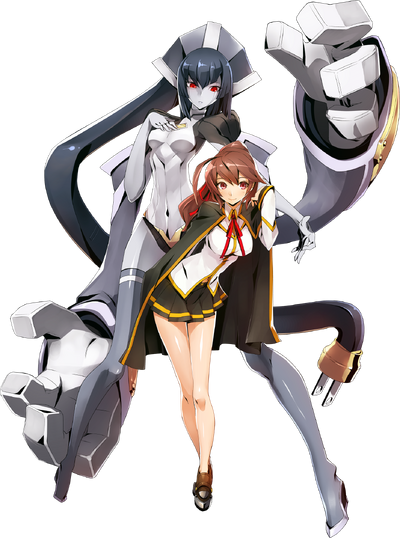 Celica Ayatsuki Mercury, also known as Sister is the younger sister of Konoe Ayatsuki Mercury and aunt of Kokonoe Mercury. She is one of the main protagonists in the Phase Shift novels before becoming a playable character starting from BlazBlue: Chronophantasma Extend onward.

Tier: 5-A, Higher with the Power of Order

Superhuman Physical Characteristics, Weapon Mastery, Magic and Ars Magus User, Summoning, Energy Projection, Healing, Extrasensory Perception (Able to sense souls), Non-Physical Interaction (Capable of hitting Arakune and Izanami), Limited Glyph Creation (Can create glyphs when unleashing her power), Acausality (Type 1 and 4; Is a person that doesn't exist within the confines of her reality, therefore no trace of her existance remains), Power Bestowal (Can bless others thanks to her nature as the "One that shouldn't Exist"), Levitation (Was shown to levitate), Soul Manipulation, Healing and Regeneration Negation (Up to High-Godly) (Magic can damage the soul, negating any form of recovery, even when the reality is warped by multiversal entity, is able to use magic, which is superior to Ars Magus, a weapon capable of killing the Black Beast, a creature that has the ability of Self Observation, which is what Terumi used to regenerate from Hakumen's Time Killer), Air Manipulation (via Burst), Body Puppetry (Made Rachel teleport the entire group out of Requiems' chamber unintentionally), Statistics Amplification, Instinctive Reaction (Nox Nyctores fights, moves and warns the user on their own without any consent), Reactive Power Level (The stronger the threat to the world becomes, the stronger the Power of Order will become), Forcefield Creation (Her forcefield troubled Kokonoe from getting in), Power Nullification (Able to passively nullify abilities and is stated to be able to suppress the forces of the boundary), Stealth Mastery (Easily sneaked up on Jin), Light Manipulation (Created light in order to escape from Azrael), Transmutation (Via Atout Rilettes), Electricity Manipulation (Capable if firing lightning magic), Life Manipulation (Capable of manipulating flow of life), Limited Subjective Reality (Power of Order can make something that doesn't exist existing), Possible Absolute Zero (Saya found Yukianesa at the church, implying that Celica might've wielded it before)

Resistance to following: Paralysis Inducement (Could fight Hakumen without getting paralyzed), Transmutation (As a chosen, she's unaffected by the Embryo's effect to turn everything into seithr), Body Puppetry (Unaffected by body puppetry effects of the Nox Nyctores), Poison Manipulation, Madness Manipulation, Biological Manipulation and Statistics Reduction (Everybody can resist Seithr to some extent which is poisonous, can induce addiction and deteriorate bodies, as well as reducing the power of others), Phenomena Intervention (Type 2; The Power of Order overpowers phenomena intervention, even by Takamagahara System and The Embryo), Petrification and Gravity Manipulation (As someone with superb skills in Ars Magus and magic, she should be able to replicate an Ars Magus barrier, which is stated to protect the user from these effects), Soul Manipulation, Healing and Regeneration Negation, and Fear Manipulation (Is capable of fighting against Ragna with the Azure, which can inflict soul damage beyond the help of a multiversal entity, and negate any form of Recovery, is also unfazed by his passive fear hax, can withstand the blows of the Azure, which is far superior to the Nox Nyctores, which are also superior to Ars Magus, weapons that are capable of killing the Black Beast, a creature that has the ability of Self-Observation, which is what Terumi used to regenerate from Hakumen's Time Killer), Radiation Manipulation (Magic is stated to being able to cancel out the effects of radioactive substances in Phase Shift), Mind Manipulation (Is unaffected by the Embryo's mindhax), Heat Manipulation (Is unfazed by the intense heat from a cauldron), Absolute Zero and Life Manipulation (Could withstand Yukianesa's strikes, which can freeze Azrael and erode away life), Death Manipulation (The Power of Order can negate the Immortal Breaker), Power Nullification (Is able to use her powers despite Kushinada's Lynchpin being activated), Empathic Manipulation (Nox Nyctores shut down emotions), Void Manipulation, Corruption (Type 3) (Can resist the effects of the Boundary, which can erase those that enter it, and corrupt them beyond recovery in a similar fashion to what happened to Arakune), Chaos Manipulation (Resisted effects of boundary which can turn everything to spiral chaos) and Disease Manipulation (Has really great life force, so much so that she never got sick even once)

Attack Potency: Large Planet level (When siphoning her magic power, Take-Mikazuchi was capable of driving the Black Beast back), higher with the Power of Order. Able to ignore conventional durability with Minerva.

Speed: At least FTL (Can keep up with Nine, Ragna, and Kagura, who can react to these speeds)

Durability: Large Planet level (Took hits from Terumi), higher with the Power of Order. Minerva able to fight while Celica is eliminated makes her somewhat difficult to truly defeat.

Stamina: Very high (Can fight while literally getting erased from existence)

Range: Kilometres normally. Hundreds of kilometers with Power of Order (Can nullify across the entire Hierarchical City of Yabiko)

Intelligence: Above Average. Has fairly good grade in Ishana and has decent magical knowledge.

Weaknesses: As Chronophantasma, she will naturally be erased from existence over time. Has an unbelievably poor sense of direction. She seemingly doesn't care for her own life at all. 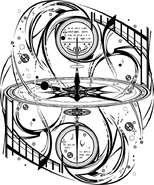 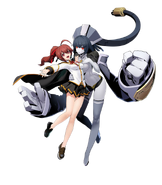 Celica when she was a nun 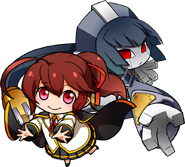 Celica's chibi portrait
Add a photo to this gallery

Reincarnation (Nine vs Celica Kokonoe theme) BlazBlue Central Fiction
Reincarnation, the theme of the fight between Celica/Kokonoe and Nine.

Start a Discussion Discussions about Celica A. Mercury