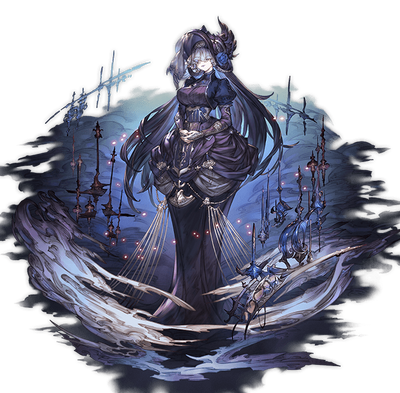 The ghost ship Celeste sails on waves of disaster. The wake it leaves behind is a foul miasma which casts those who breathe it into eternal thralldom. She fills the miasma with derisive laughter, a sound that is despair manifest. A gruesome mass of souls accumulates at her feet as she eats away at the world, melding with her to become one terrifying creature.

Superhuman Physical Characteristics, Flight, Immortality (1, 2, 3, 4 and 5, 8 in its true form), Non-Corporeal and Abstract Existence in its true form (Type 1; Primals, in their true forms, are abstract without any kind of form, representing their elements or abstractions), Regeneration (Mid-Godly; Primals are capable of regenerating after being reduced to their concept), Resurrection (One of the special Primals out there because by stealing her own death, she can resurrect herself even if she died in an instant), Summoning (Primals can summon monsters), Aura, Inorganic Physiology (Type 1), Fog Manipulation (Covered an entire island in fog upon arrival), Mind Manipulation (Anyone who breathes her miasma will serve her eternally), Death Manipulation (Capable of stealing death from the opponent, leaving them unable to die), Duplication (Created duplicates of herself to roam around town), Possession (Possessed a corpse to attack the party), Damage Reduction, Damage Boost, Necromancy (Anyone who died while having their deaths stolen will be turned into ghost or zombie, and Celeste can either send their souls to otherworld or erase their existence, as seen when she died), Transmutation (Can turn alive people to zombies in an instant), Power Modification (Any heals or regeneration will result in damage instead), Healing, Power Nullification (Capable of sealing opponent's skills), Statistics Amplification, Stealth Mastery (She is always barely visible), Darkness Manipulation, Madness Manipulation (Type 2; Capable of filling someone with darkness so much that it turns them insane) and Non-Physical Interaction (Fought Ferry who is a ghost)

Stamina: Extremely High, her abilities were constantly active for 60 to 80 years.

Intelligence: Unknown. Primals are generally extremely old and good at combat but doesn't know much about the world.

Weaknesses: Weak to Light based attacks. It can't use her special attacks when Overdrive is broken. It being abstract is only applicable when it's power is drained completely, and this is downside than anything else, as Primals in their abstract forms are completely powerless.

Retrieved from "https://vsbattles.fandom.com/wiki/Celeste_(Granblue_Fantasy)?oldid=5387625"
Community content is available under CC-BY-SA unless otherwise noted.