VS Battles Wiki
Register
Don't have an account?
Sign In
Advertisement
in: Characters, Final Fantasy, Final Fantasy VI,
and 40 more 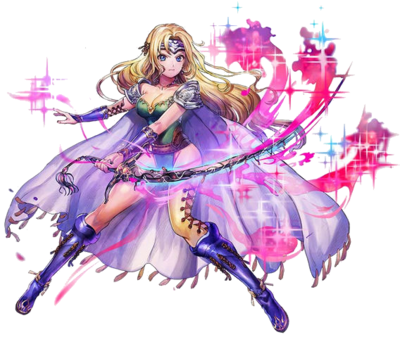 Celes Chere is a general in the Gestahlian Empire but becomes disillusioned with what it has become, joining the Returners in rebellion. A genetically enhanced Magitek Knight, she is able to cast magic without the use of magicite, much like Kefka Palazzo. Although the heroes often distrust her due to her past ties, she ultimately proves herself to be one of their most stalwart allies and closest companions, becoming particularly close to Locke Cole.

Classification: Former General of the Gesthalian Military, Member of the Returners, Magitek Knight

Attack Potency: Large Planet level (Along with the rest of the party, Locke was capable of injuring and defeating a weakened Warring Triad and God Kefka) | At least Multi-Continent level to Large Planet level (Summons are able to accomplish feats of this level and harm God Kefka) | Low Multiverse level (Is comparable to the other Warriors of Materia and draws power from the gods of the cycle. Participated in the defeat of Shinryu)

Speed: Sub-Relativistic (Should be comparable to Kefka during the battle in Thamasa by the end of the game) | Massively FTL+ (Can keep up with the other Warriors of Materia)

Stamina: Very high. She can fight through gauntlets of monsters regularly and defeated powerful beings like Kefka and Espers like Leviathan for prolonged periods.

Intelligence: Celes is one of the only successful Magitek Knights of the Gesthahlian Empire, granting her greater expertise than all of her comrades except for Terra. A former ranking general in the Gestahlian Military, she is also proficient with all sorts of melee weapons, being the only other female character in the game to wear heavy armor and wielding several of the most powerful weapons in the game, preferring bladed weapons to use with her unique Runic ability. She is one of the most level-headed members of the party and has the most combat experience at the start of the story due to her background, being a successful and lauded general favored by the insufferably arrogant Gestahl.

Weaknesses: Runic can only be used with a bladed weapon, and she cannot use it if disarmed.

For more details of the techniques at this character's disposal, please consult this list.