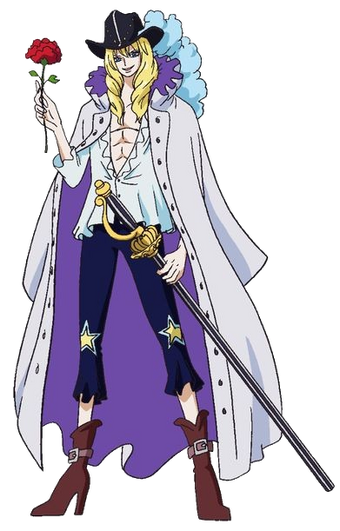 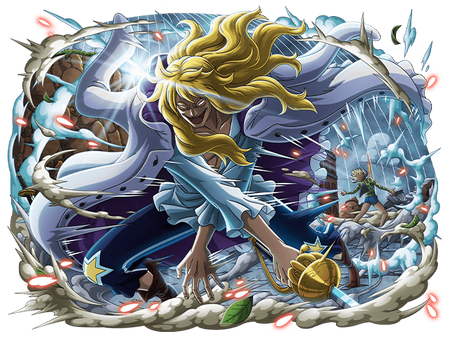 Cavendish, also known as the "Pirate Prince" is a Super Rookie, the captain of the Beautiful Pirates, and the prince of Bourgeois Kingdom. He made a name for himself after he made it to the New World but after the events of the Battle of Marineford and being overshadowed by the rookies of the "Worst Generation", he holds a grudge against Monkey D. Luffy and the other Supernovas for stealing his spotlight away from him. He entered the Corrida Colosseum hoping to win the Flame-Flame Fruit.

Underlying the vain exterior of Cavendish is a radically different second personality, "Hakuba", a bloodthirsty killer. It tries to awaken whenever he sleeps, which causes Cavendish to suffer from narcolepsy and a lethal sleepwalking. Hakuba cuts down everything he sees, and is responsible for a series of massacres in the Rommel Kingdom. Cavendish is often besieged by Hakuba's attempts to take over and must wrestle for control over his own body with his psychotic other self.

Despite his grudge against the Worst Generation, once turned into a toy by Sugar, he quickly allies himself with Luffy after Usopp frees him.

He has a bounty of 330,000,000 Berries. After Doflamingo's defeat, he and his crew became, through lottery with their allies, the 1st division of Luffy's fleet.

Attack Potency: At least Small City level+ (Comparable to Bartolomeo), City level as Hakuba (Is twice as strong as Cavendish. Instantly defeated several fighters in the Colosseum at once, one-shot Dellinger, and was feared by Gladius)

Range: Extended melee range (The Length of his Blade, 5'9)

Weaknesses: Jealousy, Prideful, Arrogant, Boastful, Vain, and cares about being "famous" too much

The sword was strong enough to hold back Chinjao's headbutt attack (although it did slightly bend). His techniques are generally named from famous drama plays.

Start a Discussion Discussions about Cavendish (One Piece)