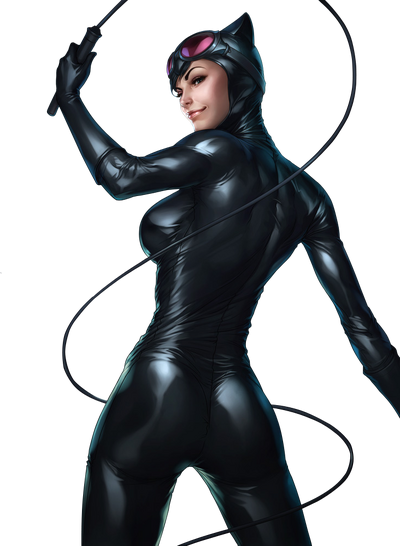 Selina Kyle, also known by her alias, Catwoman, is a costumed thief of Gotham City. Her criminal activities are often tempered by a reluctant altruism, making her an inconsistent villain and occasional heroine. She regularly eludes capture by the Dark Knight, and maintains a complicated, adversarial relationship with Batman that frequently turns flirtatious and occasionally romantic. Over the years, their relationship has developed to the point where they each have both become increasingly reliable allies. She is also the daughter of crime boss Rex "The Lion" Calabrese, and heiress to his crime family.

Speed: Massively Hypersonic (She should not be overwhelmingly slower than Katana)

Stamina: Peak human. She can fight even while heavily injured

Intelligence: Gifted. She was trained by the Armless Master in martial arts and by Wildcat in boxing and street-fighting. She is a dangerous, clever and resourceful fighter, known for precise, agile attacks and speedy getaways. Her formidable hand-to-hand combat skills are augmented by her cat-like speed, reflexes, balance, and flexibility. Catwoman has also mastered Dragon Style Kung Fu and Karate. Her skills are good enough to have fought off Batman, wounded him, and occasionally defeated him. Selina is also, most notably, a master thief possessed of great stealth and cunning. An expert at both low- and high-tech heists, she is Gotham City's finest cat-burglar, and has exceptional knowledge in computer science, as she is able to hack and breach past even the most complex and sophisticated security functions in a computer system.

Weaknesses: Normal human weaknesses, but has survived situations that would kill an average human