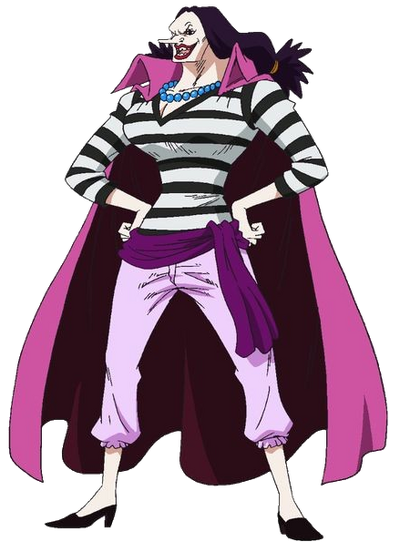 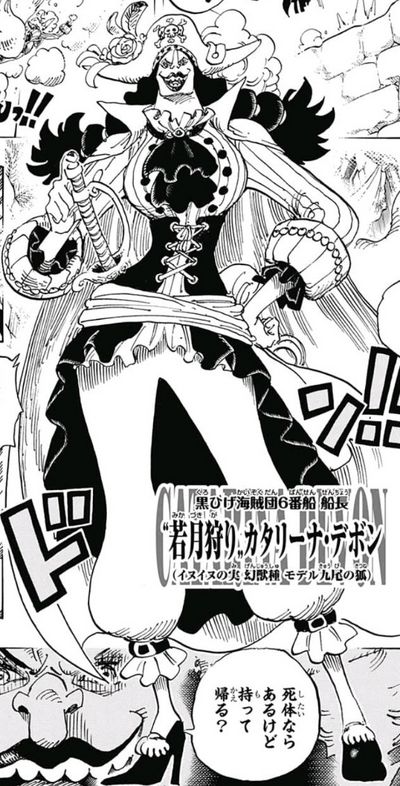 Catarina Devon, also known as "Crescent Moon Hunter", is Captain of the Sixth Ship of the Blackbeard Pirates, one of the Ten Titanic Captains. Formerly, she was sentenced to life in Level 6 of Impel Down, where she was imprisoned and effectively erased from history but under one Marshall D. Teach’s orders, she fought to the death with her inmates of her cell and was granted freedom upon surviving and since then, became a loyal crewmember of Blackbeard.

She has a weird obsession with finding beautiful women before decapitating them to add to her ever-growing collections. She declares this a pursuit of beauty. Like other characters in the verse, she has a distinct laughter which is "Murunfuffuffu".

Power and Abilities: Superhuman Physical Characteristics, Weapon Mastery | Same as before, Shapeshifting (Her Devil Fruit allows her to transform into other people)

Attack Potency: Unknown (She was imprisoned in the Level 6 of Impel Down so she should be strong, contribuited in the assassination of Whitebeard)

Stamina: Superhuman (Given One Piece's standards)

Standard Equipment: A spear | A sword.

Intelligence: Above average. Skilled actress (tricked Gekko Moriah into thinking that she was Absalom).

Retrieved from "https://vsbattles.fandom.com/wiki/Catarina_Devon?oldid=5024813"
Community content is available under CC-BY-SA unless otherwise noted.