VS Battles Wiki
Register
Don't have an account?
Sign In
in: Characters, Supernatural, TV Characters,
and 42 more 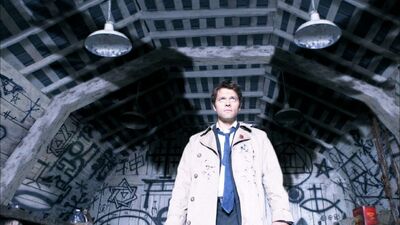 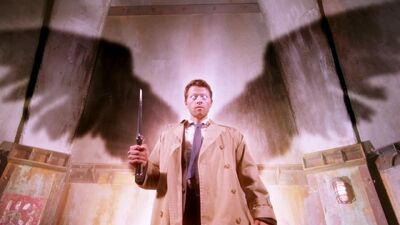 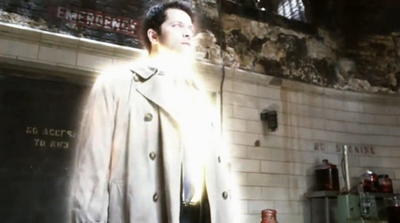 Castiel, often shortened to Cas, is a powerful angel of the Lord who was responsible for saving Dean Winchester from Hell on the archangels' command. It was his job to help prevent Lilith from breaking the 66 Seals that, once broken, would release Lucifer from his cage in Hell. Once Castiel learned that the angels wished to free Lucifer anyway, he defied his angelic brethren and died trying to help Dean prevent Sam Winchester from breaking the last seal.

After Raphael killed him, Castiel was resurrected by God and joined Sam, Dean, and Bobby Singer in a quest to stop both Heaven and Hell to prevent the brothers from becoming the vessels of Michael and Lucifer. When the Apocalypse was averted, he was again resurrected with new powers, being promoted to Seraph. He then started a civil war in Heaven to prevent Raphael from restarting the Apocalypse, Thinking a demon could not outsmart him, Castiel teamed up with Crowley to claim the souls of Purgatory. He ended up betraying Crowley and absorbed all the souls, resulting in his powers reaching the level that is much higher than an archangel, but at a high price: the powers that the evil souls granted him had warped Castiel's mind, causing him to proclaim himself as the new God.

Castiel's legacy has seemed to have become legendary among angels and demons alike, as many recognize him as the only angel who defied God's rules and cooperated with humans on his own decision, which he is either loathed or respected for. He is also the only angel to have been killed and been resurrected multiple times. He is the only known angel who has repeatedly been resurrected by God so he could help Sam and Dean Winchester.

Powers and Abilities: Superhuman Physical Characteristics, Matter Manipulation (Atomic level. Can obliterate enemies. Far above Demons such as Crowley who can do so on an atomic level), Energy Manipulation, Telekinesis, Pyrokinesis, Incorporeality, Photokinesis, Astral Projection / Dream Walking, Immortality (Types 1, 2 and 3), Regeneration (Mid-High. Far superior to Crowley who can regenerate his vessel from a pile of ashes; including his grace albeit slowly), Invisibility, Telepathy, Teleportation, Healing / Resurrection, Soul Manipulation, Time Travel / Chronokinesis, Time Stop, Sleep Manipulation, Mind Manipulation, Enhanced Senses (Angels can see things normally invisible to humans as well as the true nature of a being. Can taste each individual molecule of an object, as well as identify dead people through the scent of their remains), Voice Mimicry, BFR, Non-Physical Interaction (Can physically grab non-corporeal beings), Absorption (Can absorb souls and graces of other Angels), Resistance to Time Stop, Mind Manipulation and to Possession, Immunity to Soul Manipulation (He doesn't have a soul) and conventional diseases | All of the previous powers and abilities, with the exception of Teleportation and Time Manipulation | All the Previous, as well as Limited Reality Warping, Time Manipulation, Power Removal (For lower/younger beings), Creation, Resistance to Fate Manipulation | All the previous powers and abilities on a vastly higher scale, as well as Reality Warping, Matter Manipulation (Sub-Atomic level), Spatial Manipulation, Regeneration (High), Life and Death Manipulation, BFR

Attack Potency: Town level (According to Uriel, he and Castiel could have obliterated a town. An angel's mere cries of pain can produce ripple effects of strange incidents; Samandriel, a seemingly lesser angel, created destructive tornadoes across Nabraska while being tortured by Crowley. Should be superior to weak angels such as Hael, and could overpower Zachariah's men even after falling from Heaven) | Town level (Can easily overpower groups of regular angels such as Duma and her henchmen, and was capable of outmatching Eremiel in a fight and throwing him across a room. Overpowered both Efram and Jonah while bound in cuffs and mentally weakened by a spell. Fought against, and defeated Kabaiel, a Grigori, and could manhandle his Apocalypse World counterpart without effort, the latter being a version of himself who never became a Seraphim or fell from Heaven. Tossed aside a Leviathan with telekinesis, and was able to fight off a group of them by catching them off-guard, though he was forced to run away afterwards) | At least Town level (Immensely more powerful than his weakened self, possessing his complete grace alongside unbroken wings), possibly City level (Implied to be capable of creating thunderstorms), far higher when empowered by souls (Strengthened himself with 50,000 Human Souls as part of a deal with Crowley, each of which was compared to a nuclear reactor. Could briefly banish Raphael from Heaven with a blast of white light, though he was still no match for the Archangel in direct combat). At least Multi-Galaxy level, possibly Universe level with Heaven's Weaponry (Gained possession of all the weapons of Heaven, whose collective power was enough to strike fear in Raphael and cause him to flee) | Universe level (Obliterated Raphael with a snap of fingers, and claimed to be capable of destroying Hell if he so desired. The sheer power of the souls absorbed by him was causing his vessel to rapidly melt over a span of days, whereas it was later shown to be able to hold even beings as powerful as Lucifer for months before starting to show negligible signs of decay)

Striking Strength: Town Class (Can trade blows with other angels. Harmed Uriel and sent him through a wall with a single punch) | Town Class (Stronger than before, in spite of his greatly weakened powers) | At least Town Class, possibly City Class | Universal

Durability: Town level (Can shrug off blows from Uriel. Regeneration and his nature as a Non-Corporeal being in True Form makes him very hard to kill) | Town level | At least Town level, possibly City level | Universe level

Range: Kilometres for most abilities, at least Low Multiversal for teleportation

Intelligence: Genius. As an angel, Castiel possesses a superhuman level of intelligence, both due to his age and nature. He explained the reason for his chronokinesis limits by partial differential equations, showing that he has a highly advanced understanding of mathematics. (Explicitly of mathematical calculus and differential geometry) Through Metatron's Reality Warping, he was given full knowledge of practically every piece of fiction written by men

Weaknesses: Angel / Archangel Blades, Angel Traps, Holy Fire. | Same as before. | Same as Before. | His physical form is extremely unstable due to the power of the souls contained inside of him, with it being only a matter of time before he explodes. Otherwise None Notable.