VS Battles Wiki
Register
Don't have an account?
Sign In
Advertisement
in: Characters, Male Characters, Nasuverse,
and 34 more 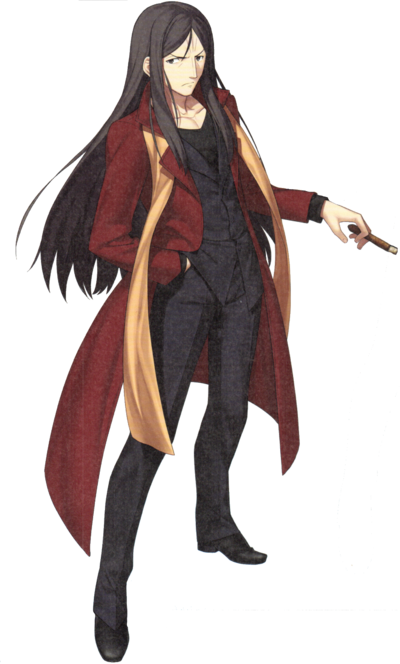 His True Name is Zhuge Liang. Also known as Zhuge Kongming, he was a famous politician during the Three Kingdoms Era of China who is known best as a military strategist. His many exploits were such it was reported that his many exploits managed to have the weaker and smaller state of Shu be able to repel the much larger and stronger Wei army for a time.

Later, due to the certain circumstances of the Grand Orders, Zhuge Liang would come to find himself be summoned in its events. Finding himself not needed to be at the forefront of its conflicts, Zhuge drew himself to being summoned within a human being as his vessel, eventually finding the best one of all in the form of Lord El-Melloi II.

Powers and Abilities: Superhuman Physical Characteristics, Magic, Energy Projection, Elemental Manipulation (Of the fire, earth, and wind variety), Can craft weapons made by turning magical energy around him to matter, Statistics Amplification, Skilled analyst and critic of human behavior, Immortality (Type 6. Unlike most psuedo-servants, Zhuge Liang has displayed the ability to transfer from one viable host to the other if his current one is no longer able to fight), Supernatural Luck, Minor Fate Manipulation (Servants with B-rank Luck or higher can change their own fates to evade inevitable outcomes such as having their hearts destroyed by Gáe Bolg), Preparation, Limited Transmutation and Servant Physiology

Attack Potency: Island level (Uses his magecraft to combat and kill other Servants. Fought against Mash and Nero alongside Alexander in Septem. Fought against Iskander in a Singularity set in an alternate 4th Holy Grail War)

Speed: Massively Hypersonic (As a combat-ready Servant, he should at least be this fast. Was able to keep up in his fight with Nero and Mash alongside Alexander, and even against the latter’s older self with help from Mash and EMIYA)

Range: Tens of meters with magecraft

Standard Equipment: His fan as well as the many weapons and items he could possibly create from Zhuge Liang’s legend (ex. Repeating crossbow)

Intelligence: Caster’s mind, rather than Zhuge Liang’s, belong to that of the latters vessel Lord El-Melloi II, a magus renowned for his ability to make all who learn from him to become great magi in their own right despite he himself possessing next to no skill in the art of modern magic; his being no different from that of Ritsuka Fujimaru themselves. But as a teacher for upcoming magi and due to his special talent of observation in life, he is capable of giving the best insight to anyone by looking at their hidden talents and giving them the steps needed to look at it themselves and become full-fledged magi of high rank. Upon becoming the vessel for Zhuge Liang, he was granted full access of the latters knowledge, and with it, his powers. With this, using his own intellect and combining it with Zhuge’s, Caster is able to compensate his lack of combat prowess through a level of magecraft he himself could never obtain on his own, capable of fighting enemies as powerful as Nero and even his former Servant in life Alexander the Great in addition to giving his master and allies absolute correct advice when picking the right course of actions even should that advice were to contain unforeseen circumstances. It is through all this that Stheno stated him of being a first-class Servant, best shown when he won an alternate 4th Grail Holy War in a singularity by taking out almost all of the Servants or have those come to his side through manipulation alone.

Weaknesses: Cannot attack while in Spirit Form. Lacks any form of combat experience but makes it up with his intellect and magecraft to fight.

Unreturning Army: Stone Sentinel Maze: the Noble Phantasm of Zhuge Liang, a legendary military formation Zhuge made for occasions when he and his army retreat in battle by use of large rocks used to confuse invaders of Shu and drive them to death. It has turned into a Noble Phantasm of High-Thaumaturgy that forcibly changes the area where the enemies are to that of the Stone Sentinel Maze where it causes them to accumulate damage over time unless they are able to find a way out.

Chu Shi Biao: A Noble Phantasm representing the letter Zhuge Liang wrote to the young emperor Liu Shan on his preparations to invade the country of Wei, where it contained a sentence describing his feelings of faithfulness in the attack that later became famous among all other Chinese literary compositions even long past after Zhuge’s time. While normally a Noble Phantasm that acts as a kind of powerful enhancement, its effects have changed in accordance with the Human Order affected by the events of the Lostbelts. It instead allows him to summon those close to Lord El-Melloi II, as it brought Reines El-Melloi Archisorte, Luvia Edelfelt, and Gray to come to his aid during the Lady Reines Case Files event as Servants.

Item Construction: A skill which measures one's ability to manufacture magical items. Through borrowing Zhuge’s powers, El Melloi is able to create various weapons and items from the man’s legend such as his fan and tablets to use for his attacks and even a repeating crossbow. But items like potions of immortality, something Zhuge Liang never managed to obtain in his life, are not possible to make.

Territory Creation: A skill which quantifies one's ability to create a territory advantageous to them as a Magus. While he does not make a “Temple”, which is superior to a “Workshop, Zhuge Liang’s Stone Sentinel Maze counts as one and thus he possesses a skill of A.

Advice of the Strategist: A skill given to military-affiliated Servants. By means of understanding and analysis of the situation, he is able to give 100% correct advice to his allies. The higher the rank, the higher the chance of said advice to be correct no matter if it were to contain unforeseen circumstances in their way. The only means of countering this is to have an incredibly high level of luck or skill to overcome the analysis.

Command of the Strategist: Another skill given to military-affiliated Servants. This skill brings forth the maximum power of an army one belongs to including himself. For Zhuge Liang, he is able to power up the army to the point of making them as death troops that will fight on against the enemy until they either drop dead from sheer exhaustion or by fighting.

Discerning Eyes: A narrower version technique of the Human Observation skill. This skill comes from Zhuge's vessel himself, who in life was known to have such finding in one's talent and bringing them up in his teachings to other magi that it has sublimed into a skill. Through this, he is able to look at one's own weaknesses and strengths through an act of conversation and even by looking at them to an extent before finally judging them on what they need to do that will allow them to acquire something of best quality and use.