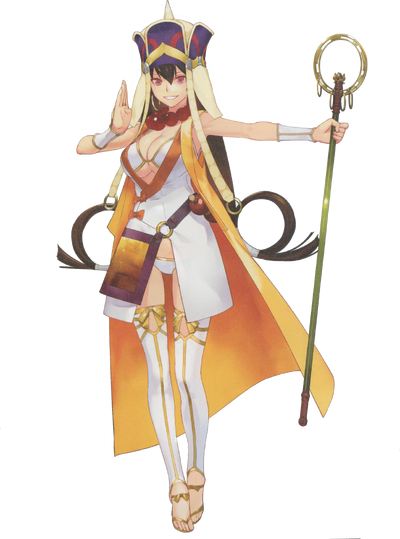 Caster the Caster-class Servant who appears in the Sixth Singularity, Camelot.

Caster's True Name is Xuanzang Sanzang a Buddhist priest from the Tang dynasty during the 7th century AD. She traveled through the Silk Road in search of the original Buddhist scriptures, until she eventually reached India from central Asia and brought back over 367 sutras to China, and becoming the founder of the Faxiang Buddhist sect in the process.

She is also a key character in the Chinese novel “Journey to the West”. The novel depicts Xuangzang retrieving the sutras under the command of Guanyin. Together with her disciples, the white dragon horse, Yu Long, the Great Sage Equal to Heaven, Sun Wukong, the Marshal Canopy Zhu Bajie and the Curtain-Lifting General Sha Wujing.

It has been said that she originally existed in the heavens as Jin Chanzi, the disciple of Shakyamuni, but fell into secular life as a result of "a certain matter". Her status led to many monsters obstructing her path during the journey. Despite that, she never lost heart and eventually upon completed her quest and ascended as the Buddha of Sandalwood Merit.

She would originally not be summonable, due to her Prophecy of Future Enlightenment and ascension as a Buddha. Even with Chaldea's summoning system, materializing and successfully summoning her is only possible due to the Incineration of the Human Order by "Grand Caster".

Powers and Abilities: Superhuman Physical Characteristics, Expert Hand-to-Hand Combtant and Staff Wielder, Magecraft, minor Mind Manipulation (Can seduce most targets into coming after her through her sheer beauty), Holy Manipulation (Can exorcise spirits and demons with sutras). Healing and Resistance to BFR and Mind Manipulation, Status Effect Inducement, Petrification and Spatial Manipulation with Prophecy of Future Enlightenment (Is capable of repelling most magical and physical attacks including mental interference, status effects such as petrification, the lockdown of space around her, and other effects. Also gains a recovery ability around her), Supernatural Luck, Minor Fate Manipulation (Servants with B-rank Luck or higher can change their own fates to evade inevitable outcomes such as having their hearts destroyed by Gáe Bolg. Xuanzang has EX rank Luck), Preparation and Servant Physiology

Attack Potency: Island level (Should be comparable to other combat-ready Servants at this level). Higher with Wu Xing Shan (Is rated as a B Rank Anti-Army/Anti Fortress Noble Phantasm, which would make it comparable to Lancer's thrown Gáe Bolg) and as a Suicide Attack (Blew a giant hole through Camelot's main gates, which would require attacks as strong as Switch On - Airgetlám to destroy)

Lifting Strength: Class 10 (Can effortlessly wield the Ruyi Jingu Bang, which was said to weigh around 7960 kg)

Intelligence: Despite being a Caster-class Servant, Xuanzhang has a preference for melee combat, fearlessly leaping into the fray with her bare fists and staff while utilizing hand to hand combat techniques taught to her by her Master, Shakayumi. She is also able to unknowingly uses her disciples weapons and techniques with incredible proficiency. In addition, she has an exceptional memory, being able to recite over three-hundred and sixty-five sutras by heart in order to use them in battle as spells suitable for her class. However, she herself acknowledges that she is rather air-headed and accident prone, which was part of the reason for having various bodyguards during her journey to the west.

Weaknesses: Xuanzhang is rather air-headed and accident prone. Her charms can attract unwanted attention from friend and foe alike. She can only ride clouds in straight lines and for short bursts. Her entire Saint Graph will be destroyed after completing the use of Prophecy of Future Enlightenment, killing her.