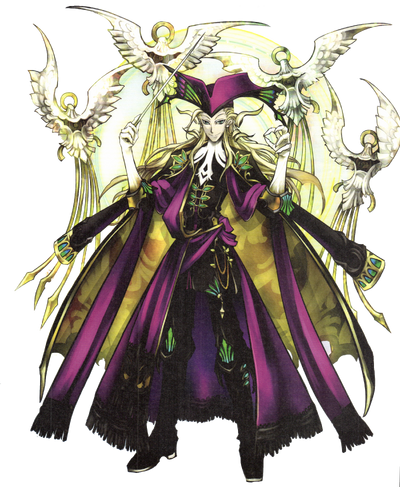 Caster is a Caster-class Servant who can be summoned by the protagonist in the Grand Orders of Fate/Grand Order. He first appears in the Orleans singularity as an ally, fighting to save France from the wrath of Jeanne d'Arc Alter alongside Marie Antoinette.

His True Name is Wolfgang Amadeus Mozart, one of the most celebrated composers in the Western musical canon. He was infatuated with two things, his music and Marie Antoinette, whom he only met once when they were both children. These obsessions in life kept him from succumbing to the influence of Goetia, who designated Mozart's family to be vessels of one of the seventy-two Demon Pillar Gods. He was also a good friend of Antonio Sallieri, who is popularly believed to have murdered Mozart due to the spread of an infectious but baseless rumor.

Age: 35 at the time of death of his real-life counterpart

Attack Potency: Island level (Despite being part of the "lowest denominator of Casters", Mozart is able to battle and kill Charles-Henri Sanson while the latter was enhanced by Mad Enhancement, as well as having assisted in numerous battles alongside Shielder, Jeanne and Marie against Servants which include Lancelot), ignores conventional durability with Requiem of Death

Speed: Massively Hypersonic (Has B-rank Agility and has kept up in numerous battles against Servants like Atalanta, Phantom and Vlad III)

Lifting Strength: Superhuman (Even the weakest Servants are physically stronger than the finest human athletes)

Striking Strength: Island Class (Despite being part of the "lowest denominator of Casters", Mozart can battle and kill Charles-Henri Sanson while the latter was enhanced by Mad Enhancement.)

Stamina: High (Held the line against an army of wyverns alongside powerful Servants like Siegfried and St. George for an extended time)

Intelligence: Mozart is a prodigy whose works are acclaimed around the world, allowing him to use his music-based abilities masterfully no matter what venue he's performing in. Despite his lack of practical combat experience in life and his admission as being one of the lowest Casters one can summon, he proved his mettle in battle while fighting alongside Marie Antoinette and Chaldeas' forces, fighting off wyverns alongside famous dragon slayers Siegfried and St. George and even killing Charles-Henri Sanson, who had been enhanced by Mad Enhancement.

Weaknesses: Mozart is obsessed with music and has little practical combat experience. He cannot battle while in Spirit Form. Those with high magical reserves and luck can resist Requiem of Death.

Requiem for Death: A Funeral March for the Death God: One of Mozart's most famous works, it's a demonic funeral march for Death itself that was said to have been composed right before his own passing. Those who hear it are forced to undergo a Mana and a Luck Check. If the listeners fail either check, their physical parameters are sharply reduced and they will suffer from a persistent damage effect that ignores armor and defensive magic and abilities. If they pass both checks, the effects of this Noble Phantasm are halved.