VS Battles Wiki
Register
Don't have an account?
Sign In
Advertisement
in: Characters, Nasuverse, Fate,
and 17 more 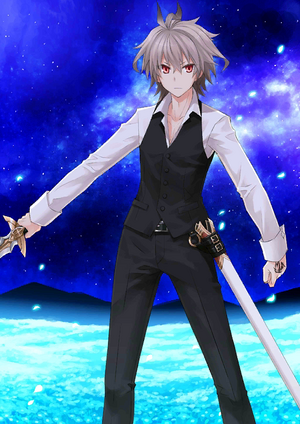 Caster is a Pseudo Caster-class Servant created by the original Sieg during the events of Fate/Apocrypha: Inheritance of Glory.

Caster's True Name is Sieg, a terminal for the homunculus who had turned into the Evil Dragon Fafnir to support Ritsuka Fujimaru inside the Greater Grail while his main body rested.

Powers and Abilities: Superhuman Physical Characteristics, Expert Swordsman, Magic, Energy Projection, Matter Manipulation (By analyzing the structure of an object, he can change it to make it more brittle), Transformation (Can transform into Siegfried using Dead Count Shapeshifter Command Spells and turn into the Evil Dragon Fafnir), Electricity Manipulation (Can emit lightning and use the electricity emitted from his nerves as energy), can use magical energy absorbed through Galvanism to improve his parameters), Telepathy, Absorption (Frankenstein's Galvanism allows Sieg to absorb non-corporeal forms of magical energy, such as energy beams and magical lightning, and convert it into magical energy for himself) | Invulnerability (Armor of Fafnir automatically nullifies any attacks and magical spells below a certain rank and dulls the effects of any it can't completely nullify, reducing attacks that would normally rip off his limbs to minor scratches), Energy Projection with Balmung, Statistics Amplification (Increases in strength and durability when fighting a dragon), Servant Physiology, Reality Warping (With his power as the Greater Grail's custodian) | Flight, Energy Projection, Fire Manipulation, Can travel to the Reverse Side of the World

Attack Potency: Island level (Comparable to most other Servants and battled almost all of the other Servants of the Great Holy Grail War on separate occasions, including Jack the Ripper, Mordred, Karna, and Avicebron, who had Golem Keter Malkuth active), Unknown with Wish Granting (Can utilize the Greater Grail, as its custodian, to grant wishes. Grail can destroy eras, create Singularities and remove the textures covering the Reverse Side of the World) | Island level (As strong as the original Siegfried, using this to fight and trade blows with Mordred) | Small Country level (Fafnir is an existence beyond that of Servants and could easily overwhelm both Luminosité Eternelle and Lord Chaldeas at the same time. Dragons can "raze entire countries with their breath"), Unknown with Wish Granting

Lifting Strength: Unknown | Class K (Comparable to Martha who stopped a speeding train, Achilles who stopped a rolling 300 ton jumbo jet, and Asterios who swam carrying the 100-150 ton Golden Hind galleon ship while injured. Comparable to Morded and the original Siegfried) | At least Class K (Carried the Greater Grail to the Reverse Side of the World)

Durability: Island level (Matched Shirou Kotomine, a Servant, but was ultimately impaled on Kotomine's sword) | Island level, higher with the Armor of Fafnir (Nullifies most attacks and even Noble Phantasms, and reduces the damage of the things that can hurt him, such as Karna's blows, to just minor wounds) | Small Country level (Is considered an existence beyond Servants, but was shot down by a grazing hit from Vasavi Shakti)

Stamina: Limitless for as long as there is enough magical energy present in the area | High (Servants can fight for an entire day without tiring and continue fighting for as long as they have sufficient mana, but he can only remain as Siegfried for three minutes at a time) | High

Intelligence: Sieg retains his experiences from the Great Holy Grail War, making him wiser and a far more effective combatant who aptly utilizes his magecraft, Frankenstein's lightning, and Astolfo's sword, holding his own against the likes of Jack the Ripper, Mordred, and Karna. As Siegfried he gains all of his sword technique, knowledge, and experience of the original, granting him swordsmanship far beyond the ken of mortal men.

Weaknesses: Using Blasted Tree will leave Sieg with wounds that are almost assuredly fatal. Utilizing the Greater Grail to grant huge wishes is severely out of character | Sieg's Dead Count Shapeshifter Command Seals only work for three minutes each. Armor of Fafnir can be penetrated through the leaf-shaped mark on his back that cannot be covered, allowing even minor attacks to deal severe damage to him. Wounds dealt to this part of his body are extremely difficult to heal, as well. Armor of Fafnir is also negated by dragon slayers or weapons with dragon slaying anecdotes. Its effectiveness is also reduced if he blocks blows with Balmung. | As a dragon, Fafnir is vulnerable to dragon-slaying weapons and those who have slayed dragons in the past. Sieg can only turn into Fafnir for a short time.

Akafiloga Argrise: The Incandescent Dragon Breath Scorching a Thousand Worlds: Sieg's primary Noble Phantasm. He temporarily reverts to his true form as the Evil Dragon Fafnir and lays waste to his foes with his powerful dragon's breath, which can even overwhelm the likes of Lord Chaldeas and Luminosité Eternelle.

Armor of Fafnir: Blood Armor of the Evil Dragon: A Noble Phantasm that embodies the legend in which Siegfried bathed in and swallowed blood of the evil dragon Fafnir, gaining the "invincible body of a dragon" in the process. As a result, Siegfried's skin and organs are tougher than the strongest steel, completely nullifying anything less than an A-Rank physical attack capable of shattering mountains or magecraft from the Age of Gods. Even Achilles, one of the most famous heroes in the world, failed to leave a scratch on Siegfried due to this Noble Phantasm. Attacks that can penetrate the armor's protective effects have their effects greatly reduced, as even the blows of the mighty hero Karna, which are able to easily sunder the bodies of Servants, gouge their vital organs, and dismember their bodies, are unable to leave more than scratches that are easily healed through Siegfried's connection with his Master.

When utilized against abilities on the level of a Noble Phantasm, it effects are further strengthened. However, Noble Phantasm-class abilities used by antiheroes, heroes legendary for their feats of slaying dragons, or wielding dragon slaying weapons or spells will bypass Armor of Fafnir entirely. In addition, the armor's defensive properties are also reduced when he blocks blows with Balmung, and he has lost his Magic Resistance skill due to this Noble Phantasm's presence. Siegfried's greatest weakness is the leaf-shaped mark on his back where a linden leaf stuck during his bathing. Due to a conceptual curse, he is completely unable to cover it with armor, magical shielding, or any other means. Should he be struck there, even the weakest Servant could slay him, and it is incredibly difficult to heal if it's wounded. However, due to Siegfried's skill there are few foes who can exploit this weakness without resorting to outright assassination.

Balmung: Phantasmal Greatsword, Felling of the Sky Demon: Siegfried's golden greatsword and a descendant of the greatest demonic sword, Gram. It possesses the properties of Holy Sword and Demonic Swords and is a blade of incredible quality that is even able to receive blows with weapons created by the gods themselves as a bringer of glory and ruin to both Siegfried and his foes. When utilized as a Noble Phantasm, it quickly takes in True Ether from the Age of Gods with the command "O' Sword let thee be filled...". It then releases an arc of energy the color of twilight with a swing of the blade, possessing enough range and destructive power to annihilate armies and match the cursed sword of Mordred. Balmung possesses an incredibly high activation rate, but it remains slower than that of the original Siegfried due to the degradation of Siegfried's Magic Core upon his summoning as a Servant. After receiving Galvanism from Frankenstein's use of her Noble Phantasm, Sieg's charging rate surpassed the Servant version of Siegfried, allowing him to counter Brahmastra Kundala by repeatedly using Balmung in rapid succession.

Blasted Tree: The Lightning Tree of Crucifixion: Frankenstein's Noble Phantasm, Sieg received this ability after his heart was restarted from the aftereffects of Frankenstein's attempt to slay Mordred. This grants him access to Frankenstein's Galvanism skill, allowing to up his parameters and fight endlessly for as long as he is able to continue cycling the mana in his environment and from his opponents' incorporeal magical attacks. He can also emit lightning at will to attack his foes. In addition, he can utilize a weaker version of the sacrificial version of the Noble Phantasm's full invocation, engulfing himself and his foe in a massive burst of lightning if used at close range. This attack is almost assuredly fatal to Sieg himself.