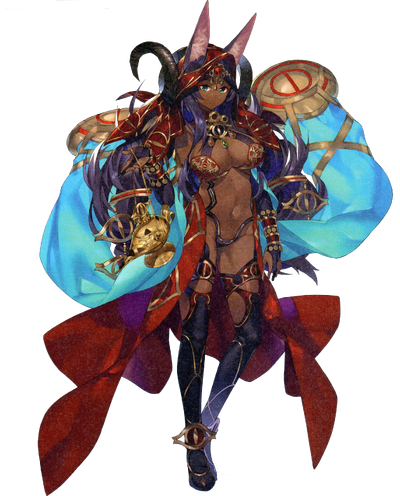 Caster of Midrash is a Caster-class Servant able to be summoned by Ritsuka Fujimaru during the Grand Orders.

Her True Name is Queen of Sheba, The legendary queen that anyone would have heard of at least once. Till today, she remains a mystery, shrouded in enigma. She is mentioned in the Book of Kings of the Old Testament, and in the New Testament. An enigmatic queen ruling over the "Kingdom of Sheba", located south of Jerusalem. However, there is no precise evidence to ascertain the existence of the Queen and her kingdom. At one of the kingdom's possible sites, Ethiopia, there is a wondrous national myth that the Queen of Sheba and King Solomon wedded, and the Queen became the matriarch of their first empire.

Speed: Massively Hypersonic (Was able to fight and keep up with Jaguar Man)

Lifting Strength: At least Superhuman (Even the weakest Servants are ten times stronger than the strongest humans)

Range: Tens of meters with Magecraft, higher with Three Enigmas

Intelligence: Sheba is blessed sharp wit and sagacity that made her capable of challenging King Solomon with riddles as well as the precognitive ability to match Solomon in a duel of clairvoyance adapting to what was becoming settled as the future and the past through the three enigmas. Fires and foremost however, Sheba is highly intelligent in regards to prosperous business ventures, so much so that profits, money, and treasure are described as being the very blood and breath that circulate through her mind and body, an aspect that is aided by both her ability to see into the future and her keen memory that allows her to clearly see what people said ages ago and brings that up again the most critical moments. Her discerning eye is so keen that she is able to appraise the worth of any object with a glance as well as analyze the actions of her opponents in the same manner. She is also an incredibly skilled magus compared to Circe, the self-proclaimed "Queen Witch" who taught Medea everything she knows. Her efforts slowed down the accelerated flow of time within the Salem sub-singularity, buying time for Chaldea to arrive and resolve it.

Weaknesses: Cannot fight in Spirit Form. She is incredibly money-grubbing and can be distracted be potential business ventures.

Retrieved from "https://vsbattles.fandom.com/wiki/Caster_(Queen_of_Sheba)?oldid=6092568"
Community content is available under CC-BY-SA unless otherwise noted.