VS Battles Wiki
Register
Don't have an account?
Sign In
Advertisement
in: Characters, Nasuverse, Fate,
and 45 more 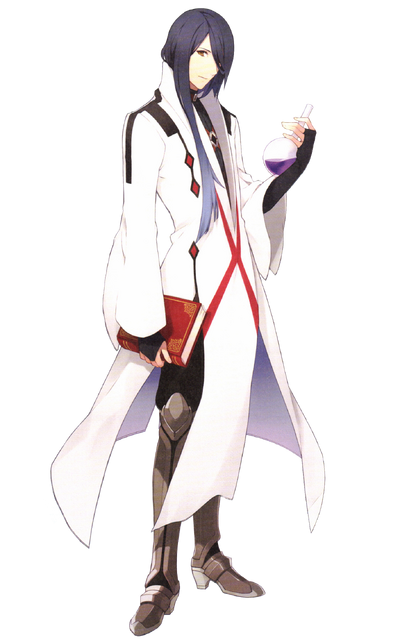 Caster is a Caster-class Servant of Manaka Sajyou in the First Holy Grail War of Fate/Prototype: Fragments of Sky Silver. He is also able to be summoned by Ritsuka Fujimaru in the Grand Orders of Fate/Grand Order, debuting in the London Singularity.

Caster's True Name is Paracelsus von Hohenheim, a Swiss physician turned alchemist during the German Renaissance in the 16th century. Over the course of his lifetime, he created books such as "the rediscovery of the four (five) elements" and "the rediscovery of the three humors", in addition to creating the original Azoth Sword that would later become one of the Mage's Association's most common Mystic Codes. This has led him to be regarded as the "modern father of alchemy" who deeply engraved it into the world, before being executed by the Mage's Association for planning to mass-produce and widely distribute Philosopher's Stones.

Tier: 9-B physically, 6-C with magecraft and Elementals, Low 6-B with Sword of Paracelsus

Attack Potency: Wall level physically (As a Caster, Paracelsus is not a physically inclined Servant suited for direct combat, but even the weakest Servants are ten times stronger than the strongest humans and can crush skulls in their fingertips like eggshells), Island level with magecraft (Capable of harming other Servants, who should at least be as strong as EMIYA. Fought against Mash and Mordred during the events of London) and Elementals (Are familiars powerful enough to do battle with Servants), Small Country level with Sword of Paracelsus (As an A+-Rank Anti-Army Noble Phantasm, it is comparable to Caliburn)

Durability: Wall level (Possesses E-Rank Endurance, making him far weaker than other Servants. However, normal humans would find harming him to be as difficult as bending a steel beam, even if he were the size of a small child)

Range: Several meters with spells. Several dozen kilometers with Sword of Paracelsus (Has a maximum range of "99" compared to Gáe Bolg's "30")

Intelligence: Paracelsus is considered the father of modern alchemy and is especially proficient at crafting magical tools. He has generated everything from automatons that perform simple tasks to Philosopher's Stones powerful enough to nullify the Noble Phantasm-sealing effects of Ozymandias' Ramesseum Tentryis. In combat, he can perform High-Thaumaturgy that would take several minutes of chanting for most with a single phrase, allowing him to bombard his foes with powerful magical projectiles as well as his signature Jewel Magecraft. Despite his kindly visage, he is also a schemer and a pragmatist, betraying his Master to join Manaka's side after realizing that he had no chance of victory, albeit regretting it in subsequent summonings.

Weaknesses: Cannot fight in Spirit Form. Creating Elementals requires an extensive amount of time and thus isn't useful in a fight without preparation.

Sword of Paracelsus: Magic Sword of the Element User: A Mystic Code in the form of a sword composed of ultra-high density Elixir. It is mainly used to enhance, assist and amplify the power of magecraft, allowing for instant use of ritualistic magic. By using the five elements as a catalyst, it is able to simulate a false version of True Ether, a force from the Age of Gods, to destroy anything around it. However, the blade's true power lies in its nature as a "quantum computer" that analyzes and steals magical properties of the opponent. A fragment of the blade, when shaped into a Philosopher's Stone, was also capable of nullifying magical properties, such as the Noble Phantasm sealing curse of Ramesseum Tentyris.

Item Construction: A skill which measures one's ability to manufacture magical items. As the modern father of alchemy, Paracelsus boasts an unmatched EX-Rank in this skill, allowing him to create a crystal called the Philosopher's Stone, artificial spirits called Elementals who correspond to the five elements (Fire, earth, water, wind, and void/ether), homunculi (Artificial humans endowed with the ability to think), among many others. Additionally, by using a leyline connected to his territory, he is able to mass produce jewels for Jewel Magecraft.

Territory Creation: A skill which quantifies one's ability to create a territory advantageous to them as a Magus. At A-Rank, Paracelsus is able to create a "Temple", which is superior to the Workshop of a lower Magus.

Elemental: The ability to create and make use of spirits who correspond to the five elements. By using a high-density crystal as a base, each of the Elementals have properties related to their element (Fire Elementals are made of concentrated flames and can emit high temperatures, Earth Elementals have extremely high mass and are as durable as adamantite/diamonds, etc). Notably, Void/Ether Elementals are difficult to create due to being made of something different than Ether Clumps. While it takes considerable labor to produce them, they are powerful enough to even assist in Servant battles.

High-Speed Incantation: A skill allowing Paracelsus to speak magic incantations at an accelerated speed. At an incredibly high A-Rank, Paracelsus' use of this skill is comparable to Medea's High-Speed Divine Words, allowing him to cast High-Thaumaturgy in the time it would take to enact a single-action spell. This turns normally lengthy incantations into simply uttering "O' [Element]". Additionally, he is able to use this skill to make his Jewel Magecraft more efficient.

Philosopher's Stone: A skill that allows Paracelsus to purify and accumulate magical energy into a crystal known as the Philosopher's Stone. While the effects greatly vary depending on the skill's rank, Paracelsus' A-Rank allows him to even bestow pseudo-immortality on any target of his choosing.