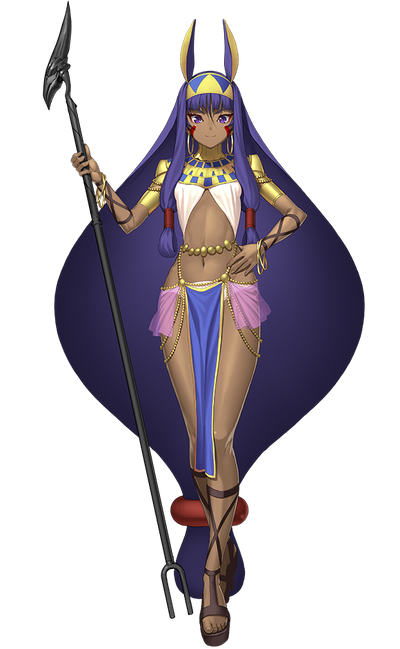 Caster is a Caster-class Servant able to be summoned by Ritsuka Fujimaru during the Grand Orders. She makes her debut in the Sixth Singularity, Camelot.

Her True Name is Nitocris, the last Pharaoh of the Sixth Dynasty of Ancient Egypt in the 3rd millennium B.C. Due to the machinations of influential figures, all of her brothers were murdered and she was made Pharaoh in their stead. It is believed that she drowned the men who murdered her brothers, before taking her own life to complete her revenge.

Tier: 9-B, 6-C with Magecraft and with Anpu Neb Ta Djeser

Powers and Abilities: Superhuman Physical Characteristics, Summoning, Death Manipulation, Curse Manipulation (Knows multiple curse spells, and her Medjed's places curses on anyone that looks into their gaze), Necromancy, Portal Creation, Illusion Creation, Air Manipulation through Magecraft, Telepathy, Animal Manipulation (Controls Ozymandias' Sphinxes, which are exceptionally powerful Divine Beasts), Death Manipulation (the spectral figures summoned from her mirror have a chance of causing instant death in those they attack), Supernatural Luck, Minor Fate Manipulation (Servants with B-Rank Luck or higher can change their own fates to evade inevitable outcomes such as having their hearts destroyed by Gáe Bolg), Limited Transmutation, Servant Physiology

Attack Potency: Wall level (As a Caster with E-Rank Strength, Nitocris is not a physically inclined Servant. However, even the weakest Servants are ten times stronger than the strongest human and can crush skulls in their fingertips like eggshells), Island level with Magecraft (As a mage from the Age of Gods, she should be somewhat comparable to Medea. Fought against Elizabeth Brave, and is noted to have contributed in defeating Servants like Minamoto no Raikou and Lancelot), Island level+ with Anpu Neb Ta Djeser (As a B+-Rank Anti-Army Noble Phantasm, it is comparable to Soaring Spear that Strikes with Death)

Speed: Massively Hypersonic (Was able to fight and keep up with Elizabeth Brave)

Striking Strength: Wall Class (Even the weakest Servants are superior to humans)

Durability: Wall level (Possesses E-Rank Endurance, making her far weaker than other Servants. However, normal humans would find harming her to be as difficult as bending a steel beam, even if she were the size of a small child). Continent level with the Mirror of the Underworld (Managed to hold back the Lion King's Light of Judgement, but was shattered in the process)

Range: Several hundred meters with Magecraft (Stopped a big sandstorm, could control a projection of herself from kilometers away). Several dozen kilometers with Anpu Neb Ta Djeser (Has a maximum range comparable to a thrown Gáe Bolg)

Standard Equipment: Her scepter and the Mirror of the Underworld

Intelligence: Nitocris is a magus wielding powerful mysteries from the Age of Gods. Her talents are primarily focused on summoning creatures like scarabs and mummies to do battle for her, allowing her to occupy Chaldea with the help of Ozymandias' sphinxes. However, her abilities are not suited for direct combat and she's defenseless in close quarters, easily being taken hostage after a surprise attack from the Hundred-Faced Hassan. She is also lacking in confidence when compared to far more powerful and famous pharaohs like Ozymandias, giving her an inferiority complex that can impede her better judgment.