VS Battles Wiki
Register
Don't have an account?
Sign In
Advertisement
in: Characters, Nasuverse, Fate,
and 40 more 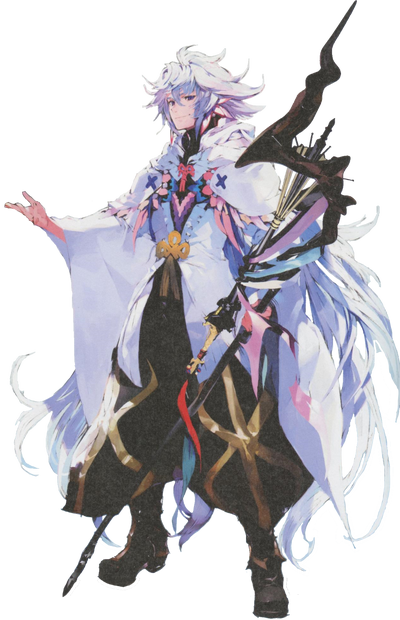 Caster is a Caster-Class Servant that appears during the fifth and seventh singularities, E Pluribus Unum and Babylonia, respectively.

His True Name is Merlin, the Magus of Flowers. He was a prophet, adviser and court magus in Arthurian legends, who left behind many prophecies and orchestrated the events leading up to Artoria Pendragon's rise as the King of Camelot. He served as one of her closest advisers up until the closing years of her reign, when he left her service to flee from an "evil witch", entering Avalon on the Far Side of the World in the process, becoming trapped by Vivian's magic in a tower that only the sinless can pass, thus being imprisoned for eternity as he watches over the world.

While he appears as a human, his nature as a hybrid born from the union between a Welsh Queen and a supernatural incubus that lived between the earth and the moon, makes him fundamentally inhuman and he would thus normally be an adolescent higher order being, a certified enemy of humanity identical to the Beasts.

Powers and Abilities: Superhuman Physical Characteristics, Healing, Sleep Manipulation, Dream Manipulation, Mind Manipulation, Illusion Creation and possible Reality Warping with illusionism and his incubus physiology (Can enter dreams of intelligent creatures, allowing him to control them. By entering Tiamat's dream he was able to keep her consciousness asleep until the defeat of the Gorgon. Can project nightmares into a targets mind, and cover villages in illusions, as well as project illusions into the world to fool the environment and the world itself), Forcefield Creation, Energy Manipulation, Energy Projection via his Holy Sword, Curse Manipulation, Elemental Manipulation, through Magecraft, Possible Memory Manipulation (Can wipe himself from everyone's memories), Telepathy, Shapeshifting (Can take on various shapes, and change is form at will. His true form is unknown), Transformation, Life Manipulation and Transmutation (Can cause flowers to bloom and turn the ground he walks on into a flower field. Redirected the power of Tiamat's Sea of Life to cause flowers to bloom everywhere in the Underworld), Biological Manipulation (Can change someone's sex), Precognition and Clairvoyance (Merlin's clairvoyance lets him see through the world, allowing him to view everything in the present era down to the tiniest detail, and thus predict future events), limited Empathic Manipulation (Simply being around him relaxes people, and makes them feel a lack of responsibility. His presence alone is disarming and pacifying), Expert Swordsman, Summoning (Can summon his holy sword to his hand), Time Travel (can manifest himself in different periods of time, and sent Bedivere through time), Creation via Item Construction, Soul Manipulation (Modified Saber's soul to give it a dragon aspect, although it likely isn't combat applicable), Immortality (Types 1, 5 and 9; Merlin's true self is confined in Avalon and he has transcended death), Preparation, Servant Physiology, Immunity to Death Manipulation (As he has transcended death, Merlin has no concept of death unless it is forcefully placed upon him by a being of great power), Resistance to BFR (Can resist Rayshift due to having Independent Manifestation)

Speed: Massively Hypersonic (At least comparable to other servants)

Standard Equipment: His staff and a Caliburn-like sword

Intelligence: Merlin is one of the most powerful magi in existence and is considered among the top ranking casters, made evident by the fact that he's qualified to be summoned as Grand Caster, marking him as the greatest caster of his era. He considers himself on par with the King of Magic, a boast supported by his possession of Clairvoyance, signifying his supreme mastery over thaumaturgy. His main forte in magecraft is illusions, which is at a level that lets him easily project nightmares into the realm of the psyche and create illusions that can cover a village, capable of fooling people and the environment itself. Utilizing Magecraft he is able to accomplish tasks such as modifying Excalibur into an artificial arm, cast potent spells capable of preventing Chaldea and Heroic Spirits like the Knights of the Round Table from seeing Bedivere’s true self. Rin Tohsaka even states that the task of disguising Artoria’s gender and arranging for Mordred's birth would be all but simple to him. In addition to his mastery of magecraft, he is also a good adviser and teacher, having guided and assisted Artoria throughout her reign and taught her a multitude of things including swordsmanship while raising her

Weaknesses: Merlin is laid-back, lazy, childish and rarely serious unless the situation is dire. He often bites his tongue during incantations and thus prefers to use his Holy Sword. He is somewhat full of himself and enjoys flaunting his superior magical prowess