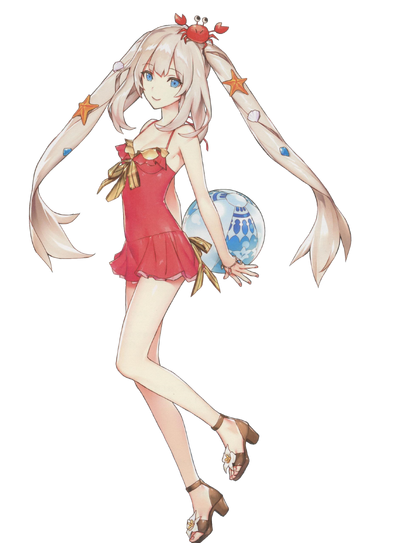 Caster is a Caster-class Servant able to be summoned by Ritsuka Fujimaru in the Grand Orders of Fate/Grand Order. She makes her debut in the Chaldea Summer Memory event.

Caster's True Name is Marie Antoinette, the last Queen of France before the French Revolution in the late 18th century. Normally summoned as a Rider, she has been changed into a Caster due to Scáthach altering her Saint Graph.

Tier: 9-B physically. Low 7-B with magecraft. Higher with Crystal Dress

Age: 37 at the time of her death. Summoned just before she entered puberty.

Attack Potency: Wall level physically (As a Caster with E-Rank Strength, Marie is vastly weaker than most Servants. However, even the weakest Servants are ten times stronger than the strongest humans and can crush skulls in their fingertips like eggshells). Small City level with magecraft (Killed multiple Demon Boars, Phantasmal Beasts who could mortally wound Fionn and Diarmuid and take the form of Servants like Kintoki and Heracles). Higher with Crystal Dress (As an A-Rank Noble Phantasm, it is far stronger than C-Rank Noble Phantasms like Triple-Linked Crane Wings)

Lifting Strength: At least Superhuman (Even the weakest Servants are ten times stronger than the finest athlete)

Intelligence: Marie's personality is largely unchanged from her Rider counterpart. Although she has no experience as a magus, she is able to skillfully manipulate her volleyball and even multiply it in combat. Her skill is great enough to help slay demon boars powerful enough to kill skilled warriors like Fionn mac Cumhaill and Diarmuid Ua Duibhne.

Crystal Dress: The Lovable Brilliance, For Eternity: A manifestation of the radiance of her royal authority. It signifies Marie's own radiance, with beauty matching a flower at the beach. It functions by damaging and debuffing her enemies while empowering her allies.

Item Construction: A skill which measures one's ability to manufacture magical items. Marie only possesses a paltry D-Rank in this skill, only allowing her to create ordinary objects like beach balls.

Territory Creation: A skill which quantifies one's ability to create a territory advantageous to them as a Magus. Marie possesses an A-Rank in this skill, manifesting in her creating a beach volleyball court, and would theoretically allow her to create a "Temple", which is superior to the Workshop of a lower Magus.

Beach Flower: A skill that determines how much attention Marie will receive from the opposite sex. At A+, she has the popularity of a celebrity, attracting gazes from all over.

Princess of Loveliness (Sea): A skill that indicates one's charismatic nature to bring and attract people to her rather than lead them. When combined with her Beach Flower skill, Marie is revered and protected as a princess of the beach merely by existing.

Sunflower Sparkle: A skill that denotes Marie's natural beauty, for it is fitting to call her a flower of the sun for the smile she displays on the beach.

Retrieved from "https://vsbattles.fandom.com/wiki/Caster_(Marie_Antoinette)?oldid=6992022"
Community content is available under CC-BY-SA unless otherwise noted.