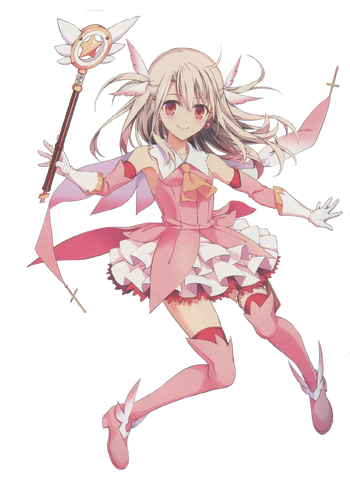 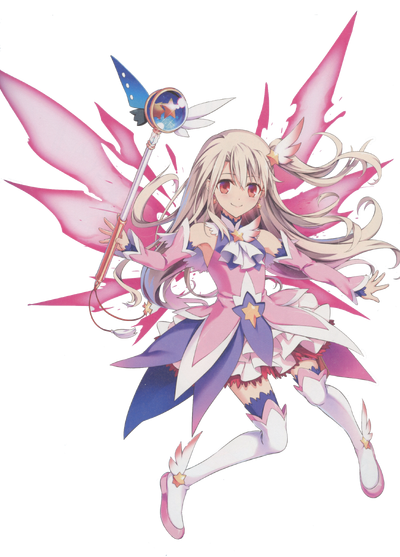 Caster is a Caster-Class Servant who first appears in the Prsima Causeway event.

Her True Name is Illyasviel von Einzbern. Initially from a world where she was living an ordinary life as a civilian, Illya gained the power to transform into a magical girl through a sentient rod and, with the introduction of the wands previous user, she was thrust into a number of matters related to not only her own homeworld but of another that was home to that of her friend, Miyu.

Illya appeared in the world of Fate/Grand Order along with Chloe and Miyu to investigate a mirror world incident, only to be separated from the latter two and ending up all alone with Ruby in a world not of her own. Along the way, she met Chaldea and, with their help, managed to save her friends from the hands of the First Lady. Though she parted ways with Chaldea and left for home with Chloe and Miyu, a part of her existed for Chaldea to summon her, allowing her to assist them as one of many Servants to resolve the singularities.

Powers and Abilities: Superhuman Physical Characteristics, Magecraft, Flight and Levitation, Energy Manipulation and Projection, Forcefield Creation, Statistics Amplification (Can increase her magical power through her Zwei form but at the risk of her own life), can summon Heracles axe sword for attacks, Supernatural Luck, Minor Fate Manipulation (Servants with B rank luck are able to overturn inevitable outcomes such as having their heart pierced by Gáe Bolg), Limited Power Nullification, Servant Physiology, Resistance to BFR

Attack Potency: Island level (Despite possessing E rank strength, she was, with help from Shielder, able to fight Nursery Rhyme, Medea Lily, Medb, Helena, and the Demon Pillar Glasya-Labolas). Planet level with Quinteet Feuer (Should be the same that was used by her normal counterpart in Kaleid, who was able to clash with and eventually overpower Child-Gil’s Enuma Elish)

Speed: Massively Hypersonic (Can keep up with other Servants despite her D-rank agility)

Lifting Strength: At least Superhuman (Can somewhat lift Heracles axe sword and slam down for an attack)

Stamina: High (Other Servants can fight for an entire day without end)

Intelligence: Should be the same as her original counterpart, having a natural affinity to magecraft and being able to utilize the abundant energy Ruby supplies her for her attacks and barriers. Having experience from her original counterpart fighting Servants from her home world, she is also capable of fending off against them in battle even without her ability to use Class Cards in this world.

Quintett Feuer: Multi-instrumental Saturation Bombardment: A technique used by Illya in her Kaleid Liner Zwei form which has materialized as a Noble Phantasm upon being summoned as a Servant. It changes Illya’s entire bodily systems, that being her muscular, nervous, circulatory, and lymphatic, to that of magical circuits, granting her a massive increase to her magical output that can rival the light of the planet. In her home world, she was even able to use this against the child form of Gilgamesh and clashing with his Enuma Elish, eventually coming to overpower it and winning their duel.

Magic Resistance: The class ability of the Knight and Rider classes. It is an innate ability that grants protection against magical effects. Unlike the Resistance effect that merely rejects Magical Energy, this ability cancels the spells altogether. Illya’s B-rank Magic Resistance negates spells with a chant below three verses, making it difficult for even High-Thaumaturgy and Greater Rituals to affect her. In addition to this, her transformed state also increases the effects of her other abilities like her physical protection, healing speed, physical prowess, and others. Strengthening their effects in the process.

Child of Nature: A skill representing the miracle of her birth and the hope of her parents who wish for her to live a normal life, granting a blessing unto the young girl.

Infinite Magic Energy Supply: Through her Kaleidostick, Illya is capable of utilizing its infinite mana supply to perform her attacks and many other abilities. However, she is limited to a certain degree of output due to her magical circuits unable to use its full potential.

Pleasant-Type Mystic Code: The mystic code magical stick named Ruby-chan, formally known as “Magical Ruby.” It is a natural human-made spirit contained in the form of a Kaleidostick created by Kischur Zelretch Schweinorg. It has an unnatural obsession with magical girls, and while it does support its owner, it will stubbornly refuse anything other than magical girls.

Suspicious Drug: A mysterious drug that Ruby has crafted in a length of time. Its efficiency is thought to be extraordinary, but due to the behavior of the Kaleidostick, it is generally advised for the master to refrain from its use.

Retrieved from "https://vsbattles.fandom.com/wiki/Caster_(Illyasviel_von_Einzbern)?oldid=5721073"
Community content is available under CC-BY-SA unless otherwise noted.