VS Battles Wiki
Register
Don't have an account?
Sign In
Advertisement
in: Characters, Game Characters, Nasuverse,
and 27 more 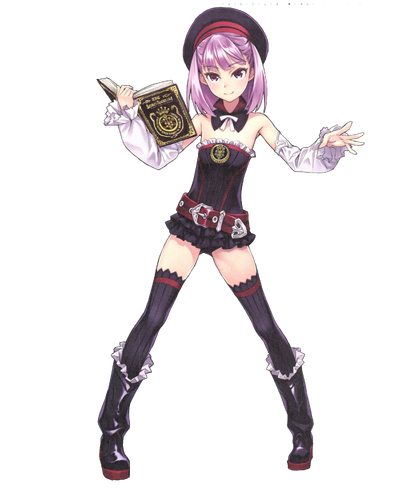 Caster is a Caster-class Servant Ritsuka Fujimaru can summon in the Grand Orders of Fate/Grand Order.

Caster's True Name is Helena Petrovna Blavatsky, a famed occultist from the 19th century and the founder of theosophy, which looks to the ancient past to find the path to salvation and enlightenment. Born with a sudden mutation that allowed her to use magecraft, she became a prodigious magus with high-profile contacts from around the globe, including Nikola Tesla and Thomas Edison. Her unorthodox methods and belief in the (likely fictional) Lemurian continent led the Mage Association to brand her a heretic, but she nevertheless pressed on in hopes of reaching the Root by following the steps of the "Mahatma" before her.

Tier: 9-B, 6-C with her magecraft, higher with Sanat Kumara

Powers and Abilities: Superhuman Physical Characteristics, Magic, Elemental Manipulation, Holy Manipulation (Can utilize the sacraments and rites of the Church), Power Nullification (Cut off Ritsuka's magical energy supply), Energy Projection, Summoning, Supernatural Luck, Minor Fate Manipulation (Servants with B-rank Luck or higher can change their own fates to evade inevitable outcomes such as having their hearts destroyed by Gáe Bolg), Can hear "voices" from Akasha that grant her a degree of insight that most others lack, Telepathy, Limited Transmutation, Preparation, Servant Physiology and Resistance to BFR (Has enough luck rank to resist Gate of Skye)

Attack Potency: Wall level (As a magus, Helena is not a physically inclined Servant but should still be stronger than even the finest athletes as the weakest Servants can crush skulls like eggshells in their fingertips), Island level with her magecraft (As a combat-capable Servant, her spells should be at least this strong in order to kill other Servants. Some of her spells include magecraft from Ancient Egypt and thus the Age of Gods, making her somewhat comparable to Medea), Island level+ with Sanat Kumara (As an A-Rank Anti-Army Noble Phantasm, it should do at least as much damage as an average B+ Rank Noble Phantasm like Gáe Bolg)

Speed: Massively Hypersonic (As a combat-ready Servant, Helena should be at least this fast)

Durability: Wall level (Caster-class Servants are typically not known for their durability and Helena has never been seen engaging in physical combat with another Servant. Nevertheless, she should be at least this tough as Servants are ten times stronger than the finest humans)

Stamina: High (Servants can fight for an entire day without tiring and continue fighting for as long as they have sufficient mana. Can utilize powerful magecraft continuously without tiring)

Intelligence: With the ability to hear voices from Akasha itself, Helena possesses an insight beyond that of other magi, contributing to her status as a genius who straddled the line between ancient and modern magecraft, being able to utilize a huge variety of spells to the point that "there is no magecraft she doesn't know". As a result, she at least has a working knowledge of Summoning, Black Magecraft, Alchemy, Elemental Change Magecraft, Rune Magecraft, Ancient Egyptian Magecraft, and the Church's Sacraments, granting her a wide variety of spells to choose from, though she often resorts to basic energy beams due to their simplicity and reliability. When in a pinch, she also has the unique ability to use her spells in tandem with each other for devastatingly powerful effects, but she admits that this is a trial-and-error process and that sometimes they may not work even if she performs them perfectly. Aside from her magical prowess, she is also known to be extraordinarily perceptive and reasonable, with Christopher Columbus attempting to dispose of her as soon as possible in order to keep her from derailing his plans as well as her role as the intermediary between Tesla and Edison, being the only one able to get them to work together without fighting each other.

Weaknesses: Helena cannot engage in combat in Spirit Form, Her unorthodox style of magecraft can sometimes fail to work properly, particularly when she's trying to use more ancient spells or when she tries to combine multiple spells at once.

Sanat Kumara: Venusian God, Heavenly Lord of the Flame: A "giant clad in shining ether" that appears along with an unidentified flying object, Helena boards the UFO before bombarding her foes with a barrage of energy beams that set the surrounding area ablaze.