VS Battles Wiki
Register
Don't have an account?
Sign In
Advertisement
in: Characters, Nasuverse, Fate,
and 43 more 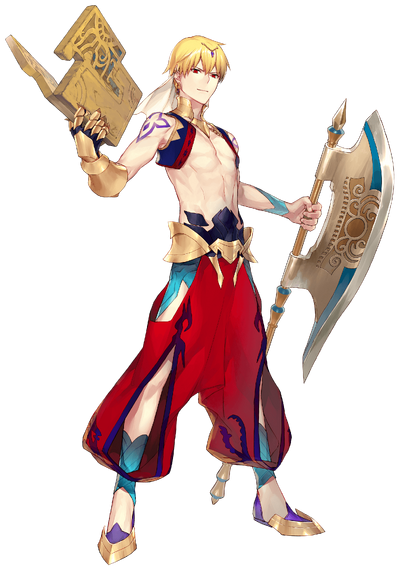 Caster is a Caster-class Servant able to be summoned by Ritsuka Fujimaru in Fate/Grand Order. He first appears as his living self in the Seventh Singularity, Babylonia.

His True Name is Gilgamesh, the famed King of Uruk and humanity's oldest hero. Instead of the overwhelmingly arrogant "King of Heroes," this aspect of him represents his time as Uruk's wise king after Enkidu's death and Gilgamesh's own failed quest to achieve immortality. He plays an integral role in defense of the Uruk against Beast II.

Powers and Abilities: Superhuman Physical Characteristics, Servant Physiology, Weapon Mastery (Wields a massive battleaxe), Higher grade of Enhanced Senses (Can sense Servants who are concealed by the effects of Presence Concealment A+), Portal Creation with Gate of Babylon (Can manipulate magic from the Age of Gods with his treasury and summon magical staves through portals to shoot jets of fire, golden lightning, and arcing energy beams. These portals can be used to banish anyone into the Sumerian Underworld. Claims to have a curse Noble Phantasm in his treasury, but nothing else beyond that), Clairvoyance and Precognition with Sha Nagba Imuru (Allows him to instantly discern great truths, such as the identity of another Servant and their Noble Phantasms, can see the possibilities of parallel worlds, predicting the future and knowing what to do precisely, can also see through the past present and future[1]), Social Influencing and Minor Mind Manipulation via Charisma, Stealth Mastery (Was skilled enough at hiding to stop the forces of Ereshkigal from finding him), Summoning (Can summon up to seven Heroic Spirits plus Merlin and even himself by using his own body as a catalyst), Supernatural Luck, Minor Fate Manipulation (Servants with B-rank Luck or higher can change their own fates to evade inevitable outcomes such as having their hearts destroyed by Gáe Bolg), Telepathy, Preparation, Resistance to BFR (Has enough luck rank to resist Gate of Skye) and Curse Manipulation (Doesn't seem to mind being in the presence of Ishtar. One Uruk soldier says that it wasn't worth getting cursed for generations just for watching them fight), Limited Resistance to Disease Manipulation (Initially endured [for a few moments] the Sumerian Summer Fever emanating from the Underworld that incapacitated every Chaldean Servant present during that time, until he succumbed to the fever)

Attack Potency: Island level (Weaker than his Archer counterpart, but should still be at least as strong as Servants like Archer), higher with magecraft (Wields powerful mystic codes from the Age of Gods that should at least be somewhat comparable to Medea) and Melammu Dingir (A B-rank Anti-Army and Anti-Fortress Noble Phantasm that fires hundreds of Broken Phantasms from his Gate of Babylon at once from ballistas from the Age of Gods, making it superior to his normal barrages)

Speed: Massively Hypersonic (Should be comparable to most other Servants, such as Enkidu)

Striking Strength: Island Class (Attacks foes with his axe and should be at least strong enough to handle most combat-ready Servants)

Durability: Island level (Should be comparable to Archer)

Stamina: High (Other Servants can fight for nearly an entire day without stopping. His living self in Babylonia was capable of powering up all of Uruk's defenses and weapons to hold off Tiamat for the plan to send her down to the Underworld, and was able to keep doing this even after taking a blow to heart from the latter until the plan was ready).

Range: Standard melee range with his axe, At least several hundred meters with Gate of Babylon and magecraft

Standard Equipment: A golden battleaxe he can use to fight in close range, a stone tablet to cast spells, mystic codes from the Age of Gods and remaining weapons stored in the Gate of Babylon

Intelligence: As the aspect of his legend after the tragedies of Enkidu's death and his failure to acquire immortality, Gilgamesh has been sobered by his experiences. As a result, he is a much wiser and more benevolent leader, being loved by all the people of Uruk to the point that they would willingly lay down their lives to protect him despite loathing him previously. Freely using the fraction of the Gate of Babylon he still has access to, he mercilessly assails the enemies of Uruk with several of the oldest mysteries in legend, and even lends the Gate's treasures to his countrymen to use as Broken Phantasms (albeit, not without much anguish). Gilgamesh also devised the successful plan to have Ereshkigal and Ishtar trap Tiamat in the Underworld, thus making her defeat possible, albeit at the cost of his life and that of his remaining citizens. Even then, he still had one final gambit to play as he summoned himself as Archer once more to help finish the fallen goddess off. Furthermore, Gilgamesh extensively uses Sha Nagba Imuru to his advantage while in this form, and the magecraft he can apply through his treasures even allows him to summon seven Servants of his own to fight alongside him, albeit while they were sustained by the naturally dense ambient magical energy of the Age of Gods. This magecraft goes so far as to distort the rules of the Holy Grail War's summoning system, as he summoned Merlin as a Servant despite the fact the Incubus hadn't died and gone to the Throne of Heroes.

Weaknesses: Gilgamesh primarily fights as a Caster instead of using his powers as an Archer. As such, he does not utilize the Gate of Babylon to bombard his enemies or use Enkidu and Ea unless he has to. He cannot fight in Spirit Form.

Melammu Dingir: King's Signal Cannon: A long-range bombardment of noble phantasms that concentrates the total force of Gilgamesh and the people of Uruk that lived in the Age of Gods. They load and fire thousands of weapons from his Gate of Babylon as Broken Phantasms to annihilate anyone that threatens the people. He dislikes using this attack, experiencing heartrending anguish at the sight of his treasures being sacrificed, but will perform it in defense of his people.

Gate of Babylon: King's Treasure: The same gate used by his Archer counterparts, Gilgamesh is only able to use a fraction of his treasury as a trade-off in order to summon seven Servants of his own to fight alongside him and due to arming Uruk's soldiers with a large portion of his treasury during the seventh Singularity. Due to this limitation and his "Sovereign of Magic Wands" skill, Gilgamesh primarily summons mystic codes to enact their various spells. Such as the Stone Tablet, which Gilgamesh primarily uses in combat along with his Golden Axe, it acts as a "spellbook" that lets him cast rune spells. He also has various magical rods and staves that can use magecraft from the Age of Gods. Those seen can generate pillars of flames, create concentrated lightning storms, and shoot light beams that home in on their targets.

Sha Nagba Imuru (He who Saw the Deep): The Omniscient Omnipotent Star: Gilgamesh's mentality and intelligence, sublimated into a Noble Phantasm. It is continuously active and does not need its true name revealed to use it, though Gilgamesh keeps it restricted most of the time. It grants him high-level Clairvoyance, allowing him to discern great truths with a glance, identifying Servants and their Noble Phantasm with ease. It does not just show him advanced predictions and possibilities but allows him to look down over all the options and discern the correct move to make. Even when he uses this ability to its fullest extent, his arrogance leads him to reject certain world lines as impossible, including one in which he was consumed by the mud of the Grail and broken down into magical energy.

Item Construction (False): A skill that works similarly to the regular Item Construction. While Gilgamesh is normally not a magus and thus shouldn't have this skill, since his treasury contains the sum of human wisdom, he can retrieve virtually any tool he needs for as long as it is not among the sealed part of the treasury.

Territory Creation: A skill which quantifies one's ability to create a territory advantageous to them as a Magus. Gilgamesh A-Rank in this skill allows him to create a "Temple," a territory that is superior to the "Workshop" used by most Magi, putting this skill to use by erecting the walls of Uruk in such a way that they can withstand the attacks of the Tiamat-Gorgon for an extended period.

Charisma: The natural talent to command an army, which increases the ability of allies during group battles. In Gilgamesh's case, it is no longer popularity but rather a kind of curse in itself due to his A+ Rank proficiency, causing normal humans to prostrate themselves at his feet in his mere presence. It can also be used as a form of subtle Mind Manipulation, getting people to do what he wants without much resistance.

Divinity: The measure of one's Divine Spirit aptitude, reflected in high ranks by the user becoming part Divine Spirit. At A-rank, it is even an indicator as one who has reached the Throne of Gods. Additionally, it possesses another effect that allows one to reduce "Anti-Purge defense" in proportion to the rank of their Divinity, allowing them to break through defensive abilities such as Protection of the Faith and Saver's Enlightenment of the Sacred Fig. Gilgamesh would typically have an A+ Rank in this skill due to being two-thirds divine, but his valid rank has dropped to B due to his distaste for the gods after they killed his friend Enkidu.

Golden Rule: A skill that measures one ability and fortune to obtain wealth. Having been fated to live a life filled with riches, and having said to collect all kinds of treasury, many of which are the originals to the numerous Noble Phantasms used by hundreds of heroes that he has also collected during his lifetime as well as possessing enough wealth never to have any concerns about poverty in any era he appears in, he possesses a rank of A in this skill.

King's Return: A skill that represents the man Gilgamesh came to be following his failed journey for immortality, where he grew to be the king Uruk needed after finding his country to be in a declined state due to his neglect and turning it back around into a prosperous country in his remaining years.

Sovereign of Magical Wands: A skill that represents Gilgamesh's fighting style and use of magecraft while summoned as Caster, granting him a bonus to his magecraft attacks' power while denoting that he wields them with the extra care befitting that of a king and his treasures to preserve them and draw out their maximum potential.