VS Battles Wiki
Register
Don't have an account?
Sign In
Advertisement
in: Characters, Male Characters, Nasuverse,
and 32 more 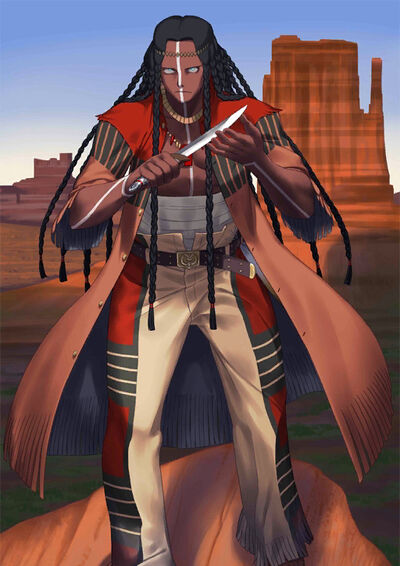 Caster is a Caster-class Servant able to be summoned by Ritsuka Fujimaru in the Grand Orders of Fate/Grand Order, first appearing as an ally-Servant in the fifth Singularity E Pluribus Unum.

Caster’s True Name is Geronimo, a Warrior of the Apaches and one of many aboriginal people from the Northern American continent. Geronimo lived his life like how any of his people would have lived in his time until the age of 20, where he lost the lives of his wife and children following the numerous raids made by the U.S in an attempt to claim land in all of North America. A turning point where the man, who originally owned a name meaning “the one who yawns”, rose up to fight to arms to take on the U.S army in revenge as a Warrior.

Name: Caster, Geronimo, "Goyaałé," "The One Who Yawns" (in his youth)

Powers and Abilities: Superhuman Physical Characteristics, Weapon Mastery, Magic, Forcefield Creation, Mind Manipulation via cigarettes, Memory Manipulation, Self-Destruction (Can unleash a powered-up version of his Noble Phantasm at the cost of his own life), Statistics Amplification (Receives bonuses when fighting in close combat), Summoning, Matter Manipulation (Can craft weapons made by turning magical energy around him to matter), Telepathy, Preparation, Limited Transmutation and Servant Physiology

Attack Potency: Island level (An offensive Caster-class Servant who is willing to go into melee combat, should also be at least stronger than a much recent Servant like Archer), Island level+ with Tsago Degi Naleya (A B-rank Anti-Army Noble Phantasm, should be comparable to another Noble Phantasm of "average" power like Phoebus Catastrophe)

Speed: Massively Hypersonic (Was able to keep up with Cú Alter and Arjuna for some time alongside Nero Bride, Robin Hood and Billy, but ultimately stood no chance)

Intelligence: Known for his bloody campaign raids against the U.S army following the tragic lost of his wife and children, Geronimo is an exceptionally skilled warrior in his right as he was able to fight off thousands of soldiers from the U.S army while only having the backing of 35 other Apache warriors on his side. Additionally, he was skilled in the use of weaponry from bows, spears, knives, and guns even to the point of mastery, which more than likely would qualify him for several other classes other than Caster. Geronimo is also shown as a tactical fighter himself, shown in his Territory Creation skill that allows him to make a camp that makes use of his surroundings to his advantage and even created an assassination plan to take down Queen Medb along with help from Nero Bride and his allies Billy and Robin where it would have succeeded had Arjuna had not been present.