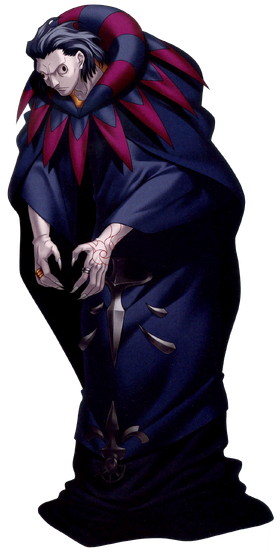 Caster is the Caster-class Servant of Ryuunosuke Uryuu during the Fourth Holy Grail War.

His True Name is Gilles de Rais, his summoning overwhelmed by his notoriety as the serial killer "Bluebeard". He was a French nobleman, a Baron, who became a hero during the Hundred Years War, fighting alongside Jeanne d'Arc. She was everything to him, so when Jeanne was burnt at the stake, Gilles fell into despair, wasting his fortune away, turning to occultism, and torturing and murdering many young boys. Although he committed many crimes, the nobles around him turned a blind eye until they desired his lands. For this, he was executed; Not out of justice, but out of greed.

Tier: 6-C, up to 6-C with summons, higher with the Gigantic Horror

Powers and Abilities: Superhuman Physical Characteristics, Magecraft, Curse Manipulation, Energy Projection, Statistics Amplification (Can boost the power of others), Statistics Reduction (Can create a cursed magic field that greatly slows whoever enters it), Mind Manipulation (Can create a field of mental corruption), Summoning (Can summon amphibious familiars with the flesh of any animal, capable of Shapeshifting, Regeneration, Poison Manipulation, and Corrosion Inducement), Portal Creation, limited Dimensional Travel (Can summon creatures and tentacles from another dimension to attack his foes), Large Size (Type 2, with the Gigantic Horror), Resurrection (He can cause horrors to be reborn indefinitely from the corpses of slain horrors), limited Blood Manipulation (Caused blood on the ground to evaporate into mist), Mind Manipulation (Easily controlled the mind of a small group of children), Fear Manipulation (Can rouse the fear of the unknown in others), Telepathy, Preparation, Servant Physiology, Resistance to Mind Manipulation (Resisted Karl's "Assimilation" which could control the minds of Scáthach and Karna)

Attack Potency: Island level (Even the weakest Servants are superhumanly strong, and shouldn't be far off other Servants that scale to this level), up to Island level with summons (His summons can threaten and overwhelm Servants such as Saber in large enough numbers), higher with the Gigantic Horror (His strongest summon, would've swallowed up all of Fuyuki City had it not been destroyed)

Speed: Subsonic with Massively Hypersonic reactions (Can react to and track Saber's movements)

Durability: Island level, up to Island level with familiars, higher with the Gigantic Horror (Due to its regeneration, it was able to recover from attacks from Saber, Gilgamesh, Lancer, and Rider and could only be killed by Excalibur or Enuma Elish)

Stamina: Very High (Servants can fight for an entire day without tiring and continue fighting for as long as they have sufficient mana. Prelati's Spellbook acts as a massive reserve of mana that allows him to sustain himself without a Master)

Intelligence: Gilles de Rais is completely insane and a total sadist and sociopath. He does not hesitate to murder or torture children unless it would further his pleasure, with his killing spree leaving him an expert on anatomy and allowing him to preserve human bodies so that his master can play with them like instruments. However, he himself is completely inept at magecraft and is only able to accomplish his feats through the use of Prelati's Spellbook, from which he uses a variety of R'lyeh phrases to call familiars from another plane which he can direct at his foes. However, he is familiar enough with the book to chant spells without having to look at it and managed to summon the Gigantic Horror even after the Spellbook was damaged by Lancer Gáe Daerg

Weaknesses: Caster cannot fight while in Spirit Form. Caster is completely insane and obsessed with Jeanne d'Arc. Destroying Prelati's Spellbook will render him incapable of summoning his normal familiars, but he can still summon the Gigantic Horror

Prelati's Spellbook: Textbook of the Sunken Spiral Castle: A demonic grimoire with a cover of glistening, wet human skin, known as the R'lyeh Text, and translated into Italian from a non-human language François Prelati. It contains records and forbidden knowledge relating to an ancient god that existed before humanity. Due to his association with Prelati and occult practices, Caster is summoned with the Spellbook as a Servant despite not being a magus in life. It allows him to summon Horrors from the depths of another dimension's seas, on top of a variety of other spells. The Spellbook is a monster itself, working as a magical energy reactor core with a massive store of magical energy independent of Caster's.

Despite his lack of magical knowledge, Caster knows the text so well that he is able to use it effectively, allowing him to summon Horrors using the flesh of other creatures as a catalyst. They are not spiritual bodies, nor are they members of the Phantasmal Species, but they are the occupants of another dimension with completely different natural laws. They can't be controlled, but they can be guided, and while they are not comparable to Servants, they can be summoned in such numbers that they can easily overwhelm them.

As long as they receive magical energy, they can remain in the world, constantly regenerating and spawning from the flesh of their own dead. If their connection to the Spellbook is severed for even a moment, they will all immediately dissipate into a bloody mist.