Caster, also called Alice, is the Caster-class Servant of Alice in the Moon Cell Holy Grail War of Fate/Extra.

Caster's True Name is "Nursery Rhyme", the embodiment of Alice's feelings on the subject projected onto a Reality Marble, Nursery Rhyme, to create a Pseudo-Servant. It is not a hero in the traditional sense, but the general term for any picture book that managed to manifest itself into a corporeal existence. It is a genre deeply loved by the children of England that came into being as a reaction to the half-voiced dreams of the young. It eventually emerged as a Servant who became a champion of the innocent. It formed the foundation for the book Alice in Wonderland, what was perhaps the best known work from the author known as Lewis Carroll, which began as a series of simple rhymes told to the daughters of a family friend while rowing down the River Thames on a warm summer's day.

Tier: 6-C. Higher with the Jabberwocky

Name: Caster, Nursery Rhyme, prefers to be referred to as Alice

Gender: Technically genderless, but takes the form of a young girl

Age: At least several hundred years old (embodiment of the nursery rhymes loved by children), but takes the form of a young girl

Powers and Abilities: Superhuman Physical Characteristics, Summoning, Reality Warping, Time Manipulation, Mind Manipulation, Ice Manipulation, Possibly Minor Plot Manipulation and Teleportation (Her skill Meanwhile... allows her to make a kind of narative transition to transport herself or those around her to The Reverse Side of The World), Air Manipulation, Expert Hand-to-Hand Combatant, Can erase her foe's existence with Nameless Forest, Supernatural Luck, Minor Fate Manipulation (Servants with B-rank Luck or higher can change their own fates to evade inevitable outcomes such as having their hearts destroyed by Gáe Bolg; Nursery Rhyme has B-ranked Luck in Fate/Grand Order), Telepathy, Preparation and Servant Physiology

Attack Potency: Island level (Managed to contend against any of Hakuno's Servants in close combat despite having E-Rank Strength), Higher with The Jabberwocky (The Jabberwocky is stated to be more powerful than Servants, utterly dominated the player's Servant and forced them to retreat until they acquired the Vorpal Blade. Defeated both Nero and Lancer in the manga)

Speed: Massively Hypersonic (Able to keep up with the player's Servants and is even able to parry their attacks)

Durability: Island level (Managed to parry attacks from the player's Servants). Higher with the Jabberwocky

Stamina: Virtually tireless for as long as she has mana

Intelligence: While she generally acts child-like and carefree like her Master, Caster is more pragmatic and logical, not hesitating to try and erase the existence of the player despite Alice's liking for them in order to protect her. She is skilled in a variety of magic derived from fairy tales and is also quite capable in hand-to-hand combat, fighting the player's Servant with nothing but her magecraft and her bare fists during her final battle with the player.

Weaknesses: The Jabberwocky can be weakened and defeated with the help of the Vorpal Blade (which needs to be created, as it doesn't exist outside of Carroll's fairy tale). Caster is more interested in preserving her time with Alice and making her happy than actually winning, prolonging her battle with the player to give Alice more playtime.

The Queen's Glass Game: Perpetual Engine - Maiden Empire: The Anti-World Noble Phantasm used by Caster. She assumes the form of her Master's desires, and it can be called the ultimate manifestation of Alice's dream. When used, it allows Caster to wind the battle back to the beginning, meaning that the battle will continue indefinitely unless Caster is defeated during the time between its uses.

Nursery Rhyme: A Story For Somebody's Sake: An Anti-Unit Noble Phantasm that allows Caster to shape her Master's desires into reality through a Reality Marble. Caster's ability is not the Reality Marble but is instead the Reality Marble itself that is able to take the form of a Servant, where it projects the masters mind out like a projected mirror and manifests itself as a Pseudo-Servant with an appearance based on that masters dreams as seen with the case of Alice and Caster taking the form of her master as a result. Originally, Caster had no name specific to it but it adopted the name "Nursery Rhyme" due to the genre and contents of the book it carries. And due to Alice's interest in nursery rhymes, this takes the form of settings and characters from such works, particularly Lewis Carroll's Alice in Wonderland and Through the Looking Glass. Thus, this gives her a variety of abilities based on the influence put to her. Those shown or are known are listed below: 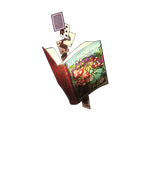 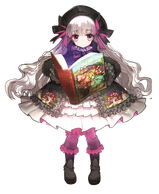 Retrieved from "https://vsbattles.fandom.com/wiki/Caster_(Fate/Extra)?oldid=5722004"
Community content is available under CC-BY-SA unless otherwise noted.