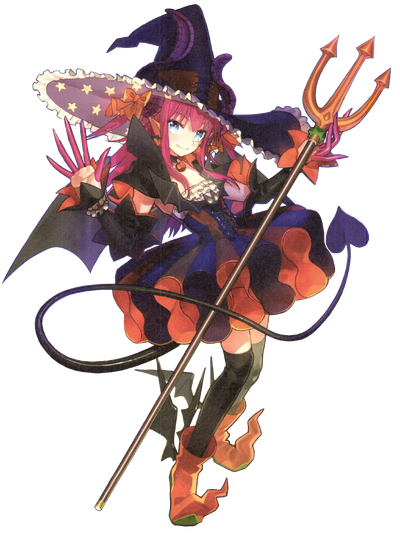 Caster's True Name is Elizabeth Báthory, a Hungarian countess from the 16th century summoned from before she committed the crimes she was infamous for. Wanting to thank Ritsuka for their actions in Orleans, she stole a tiny sliver of the Holy Grail and used it to hold a special Halloween concert where she would serenade them with her songs.

Powers and Abilities: Superhuman Physical Characteristics, Magic, Sound Manipulation (Can amplify her voice to extremely high volumes and use her signing for attacks), Telepathy, Energy Projection, Electricity Manipulation, Fire Manipulation, Explosion Manipulation, Spatial Manipulation (Using a silver of the Holy Grail, she linked her castle with Ritsuka's room across space and time), Breaking the Fourth Wall (Deliberately used a silhouette for her sprite to keep her identity hidden), Preparation, Limited Transmutation and Servant Physiology

Attack Potency: Island level (As a combat-ready Servant with D-Rank Strength, she should be comparable to Archer. Casually overwhelmed Mash and Kiyohme), Island level+ with Báthory Halloween Erzsébet (As a Noble Phantasm, it should be stronger than her normal attacks)

Speed: Massively Hypersonic (Fought against Mash and Kiyohme without taking their battle seriously)

Striking Strength: Island Class (As a combat-ready Servant with D-rank Strength, she should be comparable to Archer)

Durability: Island level (Tanked attacks from Mash and Kiyohime, with the latter noting that she was in better shape than they were by the end of their battle)

Stamina: High (Servants can fight for an entire day without tiring and continue fighting for as long as they have a sufficient supply of mana)

Range: Extended melee range with her pitchfork, Tens of meters with magic, Tens of kilometers with Báthory Halloween Erzsébet (Has a maximum range of "60" compared to Gáe Bolg's "40")

Intelligence: Having embraced the celebration of Halloween, Elizabeth has distanced herself from her past as a torturer and murderer, trading her skill with a spear for the ability to utilize magecraft. She is wily enough to convince Carmilla, Vlad III, Tamamo Cat, and Mata Hari to assist her efforts to take over the holiday. But since she was never a magus in life, she lacks the expertise to use complicated spells or anything of great technical difficulty, limiting her despite her concealed talent.

Weaknesses: Cannot fight in Spirit Form. Elizabeth is not especially skilled with magic due to not being a magus in life.

Báthory Halloween Erzsébet: Fresh Blood Special Demoness: Elizabeth summons the Prison Castle Čachtice, lined with speakers and amplifiers for her voice, to the battlefield. She then "sings" into it, creating experiences that can only be described as hell on earth, torturing her "audience's" mind and body. Although the Noble Phantasm's name has changed, it isn't all that different from the original Noble Phantasm.

Item Construction: One of the two-class skills inherent to Caster-class Servants, it reflects the user's ability to manufacture magical items. Elizabeth possesses an A-Rank in this skill, which she uses to mass-produce party goods.

Territory Creation: The second class skill inherent to Caster-class Servants, its purpose is to modify the surrounding area into a favorable location. Elizabeth's version of this skill is B-Rank, allowing her to forcefully redesign the Prison Castle Čachtice into a Pleasure Castle for Halloween.

Innocent Monster: An attribute possessed by Servants whose true lives have been distorted by their monstrous reputations, deserved or not. Due to the power of the Holy Grail, it's perhaps no exaggeration that Elizabeth has become Halloween itself.

Mana Burst (Pumpkin): The ability to store magical energy into one's weapons or body and release it in a massive burst. Elizabeth's skill materializes pumpkin spirits into her weapon and thaumaturgy, allowing her to unleash an A-Rank Mana Burst if used in festive locations.

Performance Continuation: An alternate form of her Lancer counterpart's Battle Continuation. It allows Elizabeth to return as the "main character", returning to battle regardless of her injuries as long as she does not suffer fatal wounds.