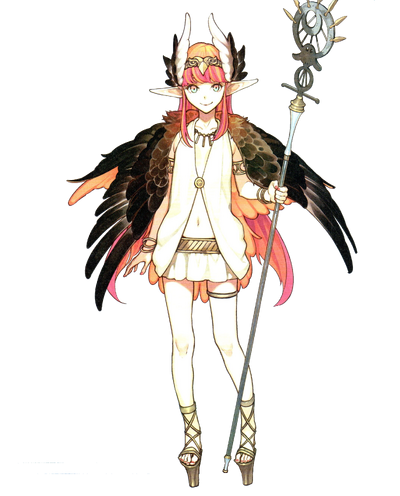 Caster's True Name is Circe, a disciple of Hecate and the infamous witch of Aenea who poisoned Odysseus' crew and turned them into piglets.

Tier: 9-B physically. 6-C with her magecraft

Attack Potency: Wall level physically (Circe is a magus and not physically inclined, much like her niece Medea. But even the weakest Servants can crush human skulls like eggshells). Island level with her magecraft (Uses the same spells as Medea, who can casually match one of Rin's gem with a single spell and easily nullified three of Rin's gems, which contained enough magical energy to completely destroy Ryuudou Temple and the Fuyuki Church. Her spells can take a few lives off of Berserker, and can potentially bypass Saber's A-Rank Magic Resistance with her strongest spells. Medea's Prisma Illya counterpart, though significantly weaker, was going to completely destroy a replication of Fuyuki City had she not been stopped)

Speed: Massively Hypersonic (Can battle alongside Servants as fast as Robin Hood and Nezha)

Striking Strength: Wall Class (Even the weakest Servants are superior to humans)

Durability: Wall level, Island level with reinforcement (Her spells and physical capabilities should be nearly identical to Medea's).

Stamina: High. (Servants can fight for an entire day without tiring and continue fighting so long as they have a supply of mana. Circe was able to withstand the combined totality of the Outer God's attempts to drive humanity insane with suffering along with the Queen of Sheba, only grunting painfully and asking Chaldea to quickly subdue Abigail Williams before their Bounded Field breaks).

Range: Hundreds of meters with her spells

Standard Equipment: Her staff, representing her worship of Hecate. A Golden Cup filled with deadly poison.

Intelligence:  The self-proclaimed "Great Witch" who taught Medea everything she knows, Circe is a powerful magus from the Age of Gods able to perform spells reaching infinitely close to the level of True Magic. Even when compared to her fellow disciple of Hecate, Medea, Circe is considered a true genius in magecraft. She is both a skilled manipulator and a temptress, having goaded Odysseus' men into feasting in her domain to turn them into helpless piglets and would have captured Odysseus himself had it not been for Hermes' protection. During the events of Salem, she manages to subdue Abigail Williams, who had become the vessel of the false god Sut-Typhon, on her own and is trusted by the Queen of Sheba to help her contain the outer god's madness.

Metabo Piglets: Forbidden Revelry: A Reality Marble of summoning. Circe replicates the feast she laid out before Odysseus' men before summoning her piglet minions to forcibly feed her foes to the point of bursting. The victims will be filled with such ecstasy that they willingly degrade themselves to piglets and beasts to serve her every whim.

Retrieved from "https://vsbattles.fandom.com/wiki/Caster_(Circe)?oldid=6120615"
Community content is available under CC-BY-SA unless otherwise noted.