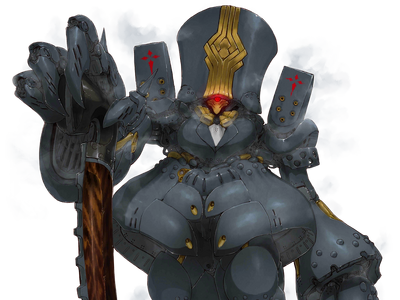 Caster is a Caster-class Servant able to be summoned by Ritsuka Fujimaru in the Grand Orders of Fate/Grand Order, making his debut in the London Singularity.

Caster's True Name is Charles Babbage, the King of Steam, a mathematician turned scientist from the 19th century who dreamed about the revolution of the world. He was known as a prodigious great scholar, employing a steam engine to invent the first computers in the world, the Difference Engine, and the Analytical Engine.

Although known as the father of the computer in modern times, he died halfway through his projects, leaving both machines uncompleted and having his envisioned future "vanish into the threshold of the eras."

Age: 79 at the time of death of his real-life counterpart

Powers and Abilities: Superhuman Physical Characteristics, Steam Manipulation, Reality Warping through Dimension of Steam (As a Reality Marble, Dimension of Steam allows Babbage to overwrite reality with his own envisioned world), Can create numerous smaller robots styled after his own armor, Telepathy and Servant Physiology

Attack Potency: Island level (Has a strength rank parameter of B++, making him far stronger than Saber under Shirou. Fought Mash and Mordred in the London Singularity.). Higher with Dimension of Steam (When used as an attack, its firepower is equivalent to a C~B rank Noble Phantasm, which should make it comparable to or stronger than similarly ranked Noble Phantasms that can produce A-rank strength. Can also increase its potency with Overload skill, making it more powerful than normal)

Speed: Massively Hypersonic (Kept up with Mash and Mordred)

Lifting Strength: At least Superhuman (Even the weakest Servant is stronger than the strongest human)

Stamina: Very High, virtually tireless as long as he has magical energy

Standard Equipment: His mallet and his "armor" manifested through his Noble Phantasm

Intelligence: Charles Babbage was a genius of his time. Initially a mathematician that studied calculations on the movement of celestial bodies, he later became a scientist after realizing there was an even easier way for all people like himself to develop calculations like this. This lead him to develop the first mechanical computers that eventually led to more complex designs, with his blueprints to said inventions being so flawless that even the tiniest of errors were not present in them, although he died partway into their developing stages before they can be completed. His intellect still shows as a Servant, being one of the three masterminds behind the demonic fog created in the London Singularity along with Paracelsus and Makiri Zolgan, with Babbage himself creating a device that propagates the demonic fog along with creating himself an army of robots to fight off against Chaldea and their allies throughout the Singularity.

Weaknesses: He cannot attack while in spirit form. Using his Overload skill can damage him.