VS Battles Wiki
Register
Don't have an account?
Sign In
Advertisement
in: Characters, Nasuverse, Fate,
and 41 more 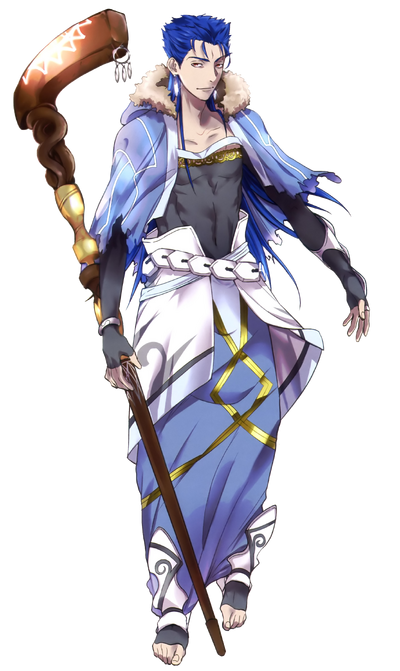 Caster is one of the Servants of the Grand Orders, first appearing as an ally to Ritsuka Fujimaru in Singularity F, Fuyuki.

His true name is Cú Chulainn, Ireland's legendary Child of Light, a great hero of the Ulster Cycle. A demigod, the son of the mortal woman Deichtine, the younger sister of King Conchobar mac Nessa, and Lugh, the god of the sun. He was born Sétanta, taking on his best known name after slaying the guard dog of the master blacksmith Culann. Ashamed of his actions, he offered to become Culann's guard dog to make up for this loss, and was ever since known as "Culann's savage dog".

Powers and Abilities: Superhuman Physical Characteristics, Breaking the Fourth Wall, Enhanced Senses (Can sense others through their mana signatures), Rune Magic, Forcefield Creation (Can create barriers for defensive purposes, and to block off escape for his opponents), Fire Manipulation), Elemental Manipulation, Healing, Statistics Amplification (Can temporarily boost his Noble Phantasms and parameters with specific Runes), Memory Manipulation, Curse Manipulation, Duplication (Can create a body double out of wood), Plant Manipulation (Can create large thickets and create wooden duplicates of himself), Clairvoyance (Can use Runes to employ effects that correspond to the Clairvoyance skill), minor Probability Manipulation (Can utilize misfortune runes), (Summoning (Can summon wolf familiars and giants made out of burning wicker), Power Nullification (Ochd Deug Odin nullifies status enhancements and continuously active passive abilities), Telepathy, Precognition (Can easily predict the paths of incoming projectiles), Preparation and Servant Physiology

Attack Potency: Island level (Can contend with Archer in close combat and instantly defeat Lancer Medusa with a single fire pillar), Island level+ with Wicker Man (A B-rank Anti Army Noble Phantasm, which should make it comparable to a thrown Gáe Bolg. A complete manifestation managed to defeat Saber Alter in First Order), higher with Ochd Deug Odin (An A-rank Anti-Fortress Noble Phantasm and thus should be stronger than Wicker Man)

Speed: Massively Hypersonic (While slower than his Lancer counterpart, he was still able to keep up with Archer)

Durability: Island level, higher with runic barriers (His Lancer counterpart can create barriers that can block great Noble Phantasms, and as a Caster, he is superior to him in this regard)

Stamina: High (Servants can fight for an entire day without tiring and continue fighting for as long as they have sufficient mana. His Lancer counterpart managed to last against Gilgamesh for nearly an entire day despite being outmatched)

Intelligence: Caster retains the laid-back demeanor of his Lancer counterpart, but fully showcases his mastery of Primordial Runes that the latter once boasted about in this class vessel. As evidenced by his A-Rank proficiency in Rune Magic, he can assail foes with powerful blasts of sweltering heat and flame to keep them on his toes while deftly deflecting oncoming attacks with his staff. His prowess is further emphasized in First Order, where he easily defeats Lancer Medusa with Shielder's assistance by leading her about before catching her off guard with a hidden Ansuz rune and finishing her with another burst of fire projectiles. He then goes on to defeat Archer in single combat, nullifying the latter's strongest Noble Phantasms with pre-prepared runes and evenly dueling him in close combat despite his class's abysmal performance in that area. He also shows a keen eye for strategy as well as a pragmatic mindset in these situations, attacking Archer after blinding him with one of Olga's stones and ambushing Saber Alter while she was in the midst of charging her Noble Phantasm

Weaknesses: Caster must draw his runes in the air or on a suitable surface to cast his magecraft, but this usually only takes a moment. Cannot fight in Spirit Form